On the feast day of Saint Gregory of Nazianzus, the ecumenical patriarch defends his decision to grant autonomy to the Ukrainian Church, as well as upholding the “primus inter pares” status for himself and the Mother Church of Orthodoxy. 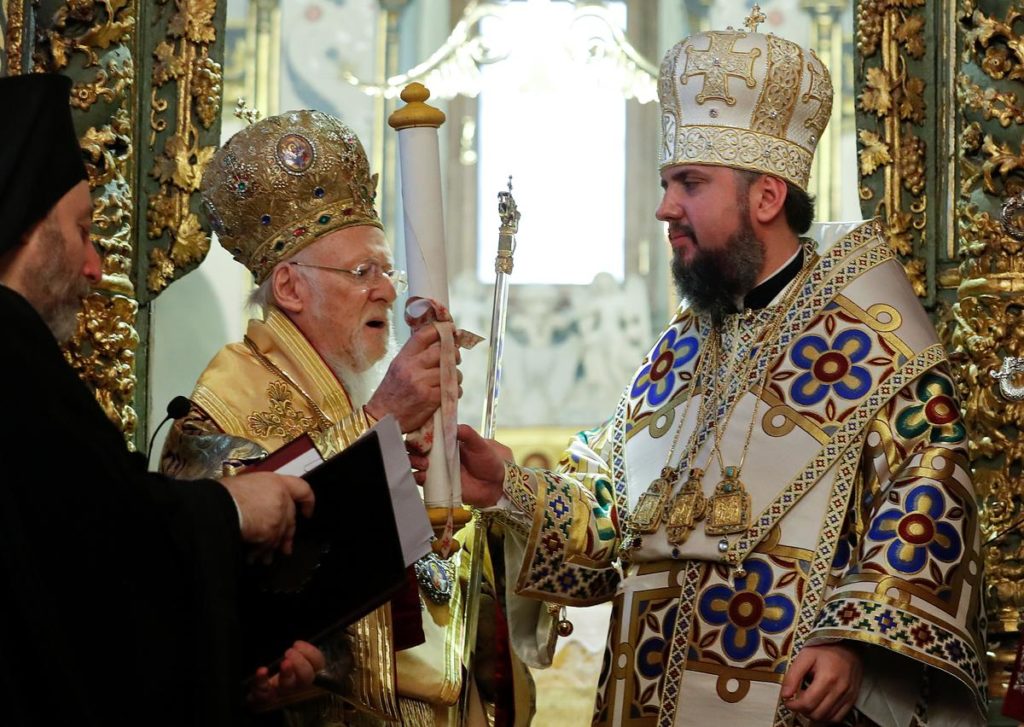 Patriarch Bartholomew giving the Tomos of Autocephaly to Metropolitan Epiphanius

Istanbul (AsiaNews) – The anniversary of the death of one of the great Fathers of the undivided Church was commemorated yesterday at the Phanar, headquarters of the Ecumenical Patriarchate.

Gregory of Nazianzus, theologian and patriarch of Constantinople, was a close friend of Saint Basil the Great, whose cultural and ecclesial education he shared, and a great rhetorical stylist, so much so that he was dubbed the “Christian Demosthenes”.

Bartholomew used the occasion to defend the Patriarchate’s decision to grant autocephaly to the Ukrainian Orthodox Church, insisting that that he did the right thing.

In his homily, the ecumenical patriarch noted that in 1923 the Phanar had granted autonomy to the Estonian Orthodox Church, autonomy which was suppressed following the Soviet invasion of 1940, and the Church’s forced incorporation into the Patriarchate of Moscow.

After the collapse of the Soviet Union between 1990 and 1991, Estonia achieved its independence, as did its Orthodox Church. This angered the then Patriarch of Moscow Alexy II, who broke sacramental communion, but only for a short time.

“Although we have received unjust insults, we have tried to do the right thing,” said Bartholomew. This was done “according to the wisdom of the ancient millennial Orthodox tradition, accumulated over the centuries,” whereby the See of Constantinople is” primus inter pares”.

“Based on this accumulated treasure, we proceeded,” Bartholomew noted, “as we consider it right to grant autocephaly to our Ukrainian Orthodox brothers, who have been deprived of sacramental communion with other Orthodox Churches for almost 30 years, for the mere purpose of punishing Filaret, because he had dared to ask Moscow for the autocephaly of the Ukrainian Church.”

“It is very clear, that there were no dogmatic, doctrinal differences. Simply, with the independence of 45 million Ukrainians from the Soviet regime, the metropolitan of Kyiv, as an expression of popular conscience, asked for autocephaly.”

For the Ecumenical Patriarch, “Filaret was wrong to ask autocephaly from Moscow. He had to ask the Mother Church in Constantinople, who had given them baptism, culture, and the Cyrillic alphabet, and was therefore the only one that had this right and privilege to grant autocephaly.”

In any case, “Filaret asked Moscow for autocephaly and got excommunication instead, which is why we intervened as a Mother Church to restore the wrong they suffered. The rest is bad information of northern provenance.”

It should be noted that in granting the Tomos to the new metropolitan of Kyiv Epiphanius on 6 January, Bartholomew also reminded him to respect those Orthodox Ukrainians who want to remain under the jurisdiction of his brother patriarch of Moscow.