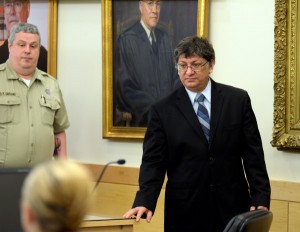 BANGOR, Maine — A former priest at St. George Greek Orthodox Church in Bangor was sentenced Monday to 12 years in prison with all but 6½ years suspended for sex crimes involving children.

Adam Metropoulos, 53, of Bangor was sentenced by Superior Court Justice Ann Murray at the Penobscot Judicial Center. She also sentenced him to 3 years of probation when he gets out of prison and told him he must register with the Maine Sex Offender Registry for life.

“The victim impact in this case was great,” said Murray, referring to the then boy that Metropoulos sexually assaulted, a family member he secretly filmed in the nude and the hundreds of people — some children — depicted in pornographic images found on his computer.

Michael Roberts, deputy district attorney for Penobscot County, asked for consecutive sentences for four of the six charges, two that were granted leading to the lengthy prison term. He said the crimes had a “significant impact on the community,” especially within the small Greek Orthodox church. “I don’t even know how to quantify that.”

Murray, who said at the sentencing that she did not believe Metropoulos’ testimony at his jury-waived trial denying that he sexually assaulted a 15-year-old altar server at the church in 2006 and 2007, found him guilty on March 17 on four felony counts of sexual abuse of a minor.

Before the trial began, Metropoulos pleaded guilty to one count each of felony possession of sexually explicit materials — for nearly 400 sexual images including many involving children — found on his computer and misdemeanor violation of privacy, for filming a relative taking a shower just days before his arrest.

The bishop of the Greek Orthodox diocese that includes Maine suspended Metropoulos the day after his arrest.

Metropoulos’s attorney, Marvin Glazier of Bangor, asked for five years with all but 2½ years suspended.

Adam Metropoulos, 53, a former priest at St. George Greek Orthodox Church in Bangor, was sentenced Monday at the Penobscot Judicial Center to 12 years in prison with all but 6 1/2 years suspended for sex crimes involving children.

Metropoulos did provide a statement apologizing for his actions, but he also complained about his treatment by fellow inmates and corrections officers at Penobscot County Jail, where he had been since his arrest in September 2014, which did not sit well with Murray.

After he made his statement, Murray asked, “Do I accept it as genuine … that he is remorseful?”

“I am hesitant when I listen to the defendant’s comments today,” Murray said. “I did hear words of remorse … [but]I also heard a fair amount of the defendant considering himself to be a victim himself.”

She deemed his statements “somewhat selfish” and said she used them as an “aggravating circumstance” when considering his sentence.

Murray sentenced Metropoulos to 18 months for the sexual exploitation of a child; five years each for two of the four counts of sexual abuse of a minor, to be served consecutively; five years each for the other two sexual abuse of a minor counts, suspended, but with two years of probation; and six months for the violation of privacy, with one year of probation.

Dylan Brennan of Bangor, a family friend, read a victim’s statement from the now 23-year-old man, who lives in Vermont. The victim was not in the courtroom, but his parents and four friends were there to represent him. The group hugged after the sentence was read.

“This man stole my life. He picked it apart and put himself where he pleased. There is little in the house where I was raised, and the memories created there, that was left untouched,” Brennan said, reading the victim’s words. “And who are we without our memories. For years I tried to hide from mine. Living the lie I chose to keep my world from falling apart. Every word I spoke had to be carefully chosen to hide the pain in my smile.

“Unable to speak to anyone about the pain I lived with every day, I was completely alone,” he said later. “I have been drifting through life ever since, unable to make meaningful connections with anyone.”

The victim said Metropoulos “systematically broke down my mind, preparing me to accept the unthinkable and never ever ask why. He told me I was special and that no one else would understand.”

“Father Adam raped me when I was too young to understand,” the end of the statement said. “He manipulated my young mind and made me live in fear. He took from me what should only be given. My innocence will never be restored.”

The now adult male is not being identified by the Bangor Daily News because he is the victim of a crime. His mother said she would let his statement speak for the family.

“I’m proud of him,” she said just before leaving the courthouse.

To reach a sexual assault advocate, call the Statewide Sexual Assault Crisis and Support Line at 800-871-7741, TTY 888-458-5599. This free and confidential 24-hour service is accessible from anywhere in Maine. Calls are automatically routed to the closest sexual violence service provider.