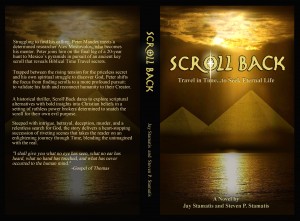 Discussions of shared passions for the archaic secret writings of the Dead Sea Scrolls actually discovered at the NW shore of the Dead Sea between 1947-1956, conspiracy theories and time travel, led Jay Stamatis and his father, Steven Stamatis, to collaborate on a novel. The result— Scroll Back – a historical fiction story has been released by GK Publishing.

The creative alliance bringing together two generations of awareness and enlightenment has proven meaningful for both Jay Stamatis, graphics industry marketer of Oswego, Illinois, and his father, Steven Stamatis, college instructor of Addison, Illinois

“Our 2 ½-year journey as a team collaborating, writing, revising, finding an agent while sharing my lifelong love of writing has been a most gratifying experience,” says Steven Stamatis. “My fascination with philosophy and religion coupled with Jay’s abiding faith and unbridled imagination in sci-fi and fantasy has led us on quite an adventure. Positive readers’ reviews are making this all worthwhile.”

“Partnering with my father has added positive dimension to our relationship,” adds Jay Stamatis. “The idea for Scroll Back germinated many years ago. We both have similar views on knowledge being suppressed, and the relentless pursuit of truth. This set us both on the same path years later as father and son, to tell a story to the world about what things should be like and what could be.”

“In Scroll Back, we’ve managed to combine historic facts, archeology, the Bermuda Triangle, Mexican pyramids and the spiritual to weave a narrative with intensity and suspense. The undisclosed contents of the Dead Sea Scrolls mean a lot to powerful interests intent on suppressing their revelations and using them to extend their power and control,” Steve Stamatis comments.

“On the other hand, characters with different motivations overcome obstacles, murder, disappointment and danger are driven by the desire to discover secrets that can change the world. Action moves back and forth from exotic locations to build a tapestry of action through several time periods,” adds Jay Stamatis.

“Each character seeks to unravel the Dead Sea Scrolls mysteries either for confirmation of their faltering faith, seek answers through archeological finds in Jerusalem and Mexico or work to solve the mysteries of the Bermuda Triangle,” Jay Stamatis adds.