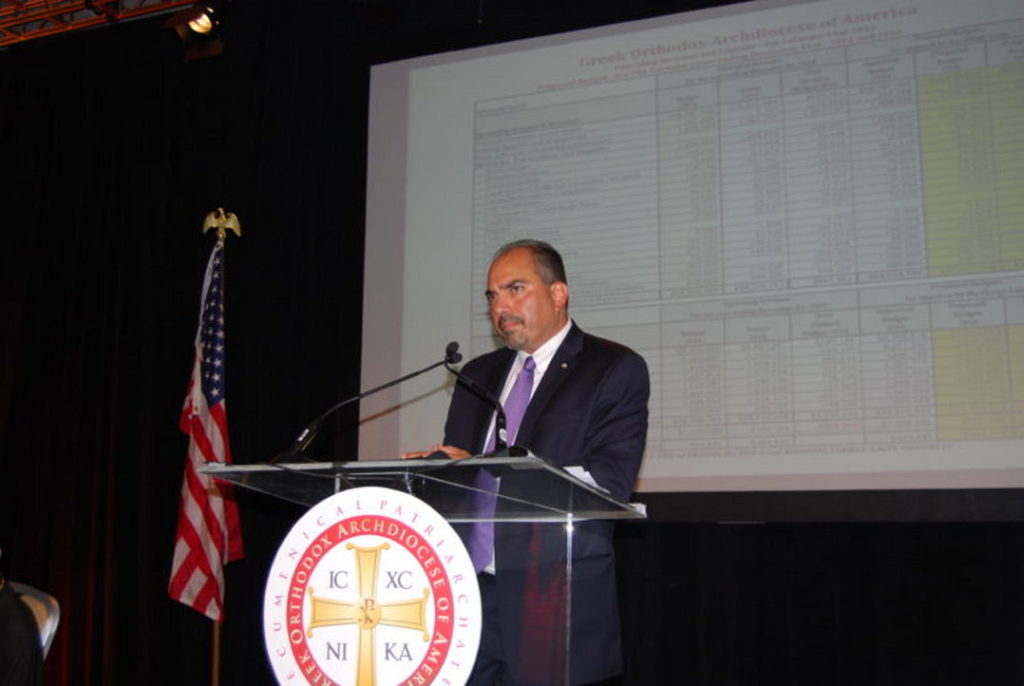 Jerry Dimitriou speaking at the Clergy Laity Congress on the Archdiocese in Philadelphia in July 2014 urging the parishes to increase their annual mandatory contributions to the Archdiocese. (Photo by TNH/Theodore Kalmoukos)

Geoffrey S. Berman, the United States Attorney for the Southern District of New York, and Ruth M. Mendonça, the Assistant Inspector in Charge of the New York Office of the U.S. Postal Inspection Service (“USPIS”), announced the arrest today of JEROME DIMITRIOU, the former executive director of a non-profit religious organization (“Organization-1”), on wire fraud charges.  Specifically, DIMITRIOU is charged with committing two embezzlement schemes:  In one, he allegedly embezzled more than $488,000 from Organization-1 by directing subordinates to issue him unauthorized excess salary payments; in the other, he allegedly charged hundreds of personal expenses to his Organization-1 credit card, without authorization, costing Organization-1 at least tens of thousands of dollars.  DIMITRIOU will be presented today in federal court in the Southern District of New York before United States Magistrate Judge Robert W. Lehrburger.

U.S. Attorney Geoffrey S. Berman stated:  “As the executive director of a non-profit religious organization, Jerome Dimitriou was supposed to serve the organization, not himself.  As alleged, over several years, he abused his leadership position and embezzled over half a million dollars through two different schemes.  This Office is committed to protecting non-profit organizations from those who allegedly steal rather than serve.”

USPIS Assistant Inspector in Charge Ruth M. Mendonça said:  “Mr. Dimitriou allegedly used his position of trust at a religious organization to steal from his employer.  His undoing came when Postal Inspectors used their trusted and sworn law enforcement position to bring him to justice.”

According to the allegations in the Complaint unsealed today[1]:

Another of DIMITRIOU’s fraud schemes involved directing subordinates to issue him excess salary and paychecks, over many years, without the authorization or approval of Organization-1.  During just 2013 through September 2017, for instance, the total value of these excess salary and paychecks was at least approximately $488,290.  During the period of DIMITRIOU’s embezzlement schemes, Organization-1 was enduring financial difficulties, a fact of which DIMITRIOU was well aware.

DIMITRIOU, 55, of Greenlawn, New York, is charged with two counts of wire fraud, each of which carries a maximum sentence of 20 years in prison.  The statutory maximum sentences are prescribed by Congress and are provided here for informational purposes only, as any sentencing of the defendant will be determined by the judge.

Mr. Berman praised USPIS for its outstanding work on this case and noted that the investigation is ongoing.

This matter is being handled by the Office’s Complex Frauds and Cybercrime Unit.  Assistant United States Attorneys Michael D. Neff and Michael C. McGinnis are in charge of the prosecution.