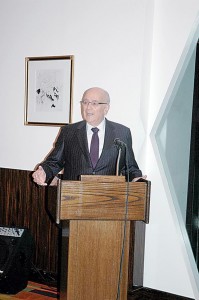 Michael Jaharis, the host along with his wife, Mary, noted the passing of Peter Kikis and Dr. Andre Dimitriades.

NEW YORK – The annual Founders Dinner of Faith: An Endowment for Orthodoxy and Hellenism filled the second story dining room of the famed Le Cirque restaurant in Manhattan on November 19 with enthusiastic members and friends of the philanthropic organization that was established as a response to a challenge issued by His Eminence Archbishop Demetrios in 2004.

Sotirhos introduced Michael Jaharis, businessman, philanthropist, and Vice Chair, who hosted the event with his wife, Mary. The evening’s highlight was the traditional presentation by distinguished individual on topics of broad interest. Earlier in the day meetings were held to review the past year’s activities and plan for the future.

Jaharis introduced C. Dean Metropoulos and said the latter is famous for his investment successes but that his philanthropic sensibilities “and what he does quietly, without a lot of fanfare,” bodes well for Faith. “ We are so lucky to have him as president,” Jaharis said.

According to its website, “The core mission of this endowment is to promote Hellenism and an understanding of the Greek Orthodox faith through a series of high quality innovative educational programs and cultural initiatives through an endowment to the Greek Orthodox Archdiocese of America.”

Designed to be a small organization composed of 50 individuals, Jaharis was pleased to announce that Faith is already up to 35 founders. The group has a special interest in supporting and inspiring young people in the United States and in Greece.

He said that they also “challenge young Greek-Americans to attain and sustain excellence by offering several college scholarships through the leadership of my good friend and fellow founder, Dr. Roy Vagelos,” who attended the dinner with his wife, Diana.

Faith also underwrites scholarships for graduate students and scholars through the Fulbright Foundation. “This year we have helped the best and brightest young minds in Greece to come to the United States and they will eventually return home and start implementing change in Greece,” Jaharis said.

Kevin Farell, CEO of Vatera Holdings introduced the speakers and moderated the Q & A that followed.

The Founders Dinner has established a tradition of providing its guests with fine dining fare and food for thought about the challenge and course of the world at large, which is the practical context of the day’s earlier focus on future of Hellenism and Orthodoxy.

While optimism was not the immediate response of the listeners to either presentation, the information was welcome in a room filled with people whose success is built on realistic thinking rather than rosy scenarios.

Achuthan’s presentation titled “Becoming Japan” debunked optimistic media reports on the prospect of the economic recovery based on stock market rises. Co-Founder & Chief Operations Officer of the Economic Cycle Research Institute (ECRI), he said bull markets have proved to be false dawns in the past.

What is significant are long term trends such as the three decades of progressively weaker recoveries in the United States and the demographic time bomb in Europe that remind of Japan’s “lost decades.”

He emphasized that policies such as quantitative easing here and monetary accommodation in Europe will ultimately fail as they have in Japan.

Ironically, his focus on key statistical turning points which dampens expectations for rapid growth in general, yields positive signs for a Greek recovery based on recent improvement in her unemployment numbers.

Admiral Stavridis presented “21st Century Security: Nobody Wins Alone.” He gave an overview of the challenges and then focused on what can be done collectively by nations to enhance security, but began with a review what the 20th century has taught us about the subject – and which we must now largely ignore.

Not entirely, however. The United States’ so called “hard power,” its traditional, but technologically- evolving military, is still the basis of its superiority and the combined defense spending of the West and Japan will continue to far outstrip that of China, a country feared by many of the guests but which Stavridis noted faces many internal challenges. 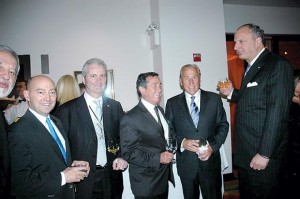 Violent extremism, drug trafficking, and what he now says is equal to all other challenges combined – cyber terror, which can destabilize nations – must be met by nation’s soft power, and most importantly, cooperation among them.

The soft power resources of the United States are also great, enabling them to reach out and breed allies within nations through initiatives like medical and educational support and programs.

Nevertheless, Americans must become better at making connections, adding that their knowledge of foreign language and cultures must improve.

His main point is that where nations once built walls – which always proved ineffectual – they must now build bridges.

Stavridis put some optimistic light on the prior economic discussion by noting that technological advances can change the game that Achuthan, who agrees on that point, described. The United States will benefit from advances in fields like biology, where the U.S. excels, and from the achievement of energy independence, all fueled by its powerful entrepreneurial spirit

Jaharis offered best wishes to George Tsunis, one of the founders, who was present, and who has been nominated to be America’s Ambassador to Norway.