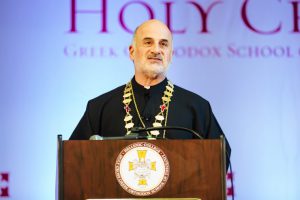 BOSTON, MA –The Executive Committee of the Board of Trustees of Hellenic College and Holy Cross Greek Orthodox School of Theology (HCHC) has established a four-Board Member Committee to examine the fate of its president, Fr. Christopher Metropulos.

It was an Executive Committee meeting on May 16, the decision was made to establish the Committee to examine Metropulos. The Committee will evaluate his overall performance and by the end of June are scheduled to present their findings to His Eminence Archbishop Geron of America Demetrios, who has a fiduciary responsibility toward HCHC as Chairman of the Board of Trustees.

Though chosen unanimously out of 41 candidates, he had not submitted his candidacy but was drafted, as TNH had reported.

Oddly, those who voted for Metropulos for president are the ones who now demand his removal, claiming they made a mistake. Some even threaten to resign if he is not removed.

In a regular Board meeting on May 19, the issue of the presidency was not discussed, but emphasis was placed on finances, where there appears to be a problem.

TNH has learned that Archdiocesan Director Jerry Dimitriou does not send the allocation to HCHC on time, and sometimes delays doing so for months.

The first meeting of the Committee to examine Metropulos was scheduled to convene on May 19, but Lelon canceled it. He was not present at the Board meeting or at the HCHC graduation on May 20.

As the TNH had reported, Lelon and Metropulos are koumpari, because Lelon baptized Metropulos’ daughter. Archbishop Demetrios knew about that relationship, and in a May 21, 2015 interview told TNH that he didn’t see anything wrong with it, even given that one was the newly appointed HCHC president and the other chair of the Presidential Search Committee. In fact, Demetrios defended the process and called it “exceptional.”

Demetrios, as well as Board Members Carlos, Badavas, and Mark Stavropoulos, and Badavas did not respond to TNH’s request for comment.