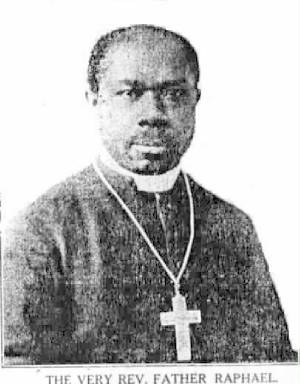 Some of the readers of Public Orthodoxy may have read my book Turning to Tradition: Converts and the Making of an American Orthodox Church. Those who have will have heard of Fr. Raphael Morgan. Others might not have read the book, but may be aware of him, perhaps due to his Orthodoxwiki entry or an essay by Matthew Namee over at orthodoxhistory.org. Morgan’s case is a fascinating one and one that has only become a bit more fascinating both because of what has been recently discovered about him and because of the times in which we live. I’ll first unpack some of his background and what’s now newly known and then offer a word of caution for the Orthodox Church as his story becomes more widely known.

I first learned of Fr. Raphael Morgan from Matthew Namee, who struck me, at the time, as an enthusiastic young man with a deep love for American Orthodox history. That love still burns within him but back then (2006-2007), it was something that led him and me to collaborate on research and idea exchanges. It was a blast, really. He did a lot of research into digital media and newspapers and would call me with his latest findings, and I distinctly remember calling him from the library at St. Louis University to discuss a couple book entries he wasn’t aware of and didn’t have access to. We continued our exchanges regarding Morgan well into 2012, with each of us finding new things and supporting each other along the way. What fascinated us both, and me especially, was this unique story of a Jamaican of African descent who moved to America, engaged in exploring Orthodoxy, took a trip to Russia that left a very positive impression on him, and got ordained in Constantinople and eventually pastored in Philly, running a fraternal order known as the Order of the Cross of Golgotha, and publicly (rhetorically) sparring with Marcus Garvey. From our work, Matthew wrote a short biography published in 2009 in the St. Vladimir’s Theological Quarterly and various essays on orthodoxhistory.org while I, in turn, wrote an article for Black Theology and a chapter for my dissertation, which I later added to, edited, and shaped into the chapter in Turning to Tradition. I found Fr. Raphael’s theological journey both unique and important. It is important because it represents another path for Christians of African descent—one that is understood as a return to a church that existed prior to racial slavery and one that has an African heritage. His story is also important because it later inspired Patriarch McGuire of the African Orthodox Church, a large segment of which would later enter into the Orthodox Church through the (Greek Orthodox) Patriarch of Alexandria.

One piece of information that I did not find, however, was how Fr. Raphael ended his life. He fell off the historical map after 1916. What happened? Did he return to Greece or Constantinople or Jamaica? Did he die of natural causes? Die of the Spanish flu? Get lynched? What happened?

Well, thanks to Fr. John Perich, we now know. I had reached out to the cemeteries in the area, including Eden cemetery, but geographical distance had prevented me from succeeding where Fr. John was able. He had spoken with both Matthew and me in the past and had developed an interest of his own in Morgan’s story and wanted to learn how it ended. With much gumshoeing on his part, we now know! We now know that Fr. Raphael Morgan died as an Orthodox priest on July 29, 1922, and received an Orthodox burial. Thanks to Fr. John, Fr. Raphael now has a small grave marker at his grave site.

All of this is exciting, and some people have expressed (to me in person) a desire to see Fr. Raphael canonized. We now live in an age of Black Lives Matter; Buttigieg’s South Bend, Indiana; and Biden’s comments on working with segregationists. What could be a more fitting way for the Orthodox Church to stand forth on racial issues than to uphold a life of sanctity and an example of godliness in the first priest of African descent to minister here in America—and a convert priest no less? Fr. Raphael Morgan offers us a different lens on the prism to look through. What writings we do have would not fall neatly onto either side of the dividing line that we may be experiencing in our current situation.

As exciting as this may be, and as much as there may be warrant for revisiting his case, there is also a reason to be cautious, for our context also includes the #MeToo movement. Yes, I said the #MeToo movement. What’s that got to do with anything, you might ask?  Well, sadly, it is relevant to Morgan’s case. Fr. Raphael obtained a divorce, and in the transcript we have, there are allegations of abuse. Now, the alleged abuse was physical, and not sexual, but it was alleged nonetheless, by his wife Charlotte and confirmed by a friend of hers (who testified to it). Now, this doesn’t mean he did commit it, but the document certainly doesn’t help his case any, and I would consider the allegation credible (though I’m no lawyer).

So, here sits American Orthodoxy, in the midst of all the political, social, and moral complexities of our society. We can now bookend the life of the first black Orthodox priest in America. That’s a cause for celebration, and it’s that celebratory feeling that has inspired a few people to express a desire to see him recognized as a saint or even re-interred at St. Tikhon’s Monastery. Yet we must also be open to seeing him as a flawed man, and one who possibly abused his wife. That needs further exploration, prayer, and thought. So, now Fr. Raphael Morgan has taken on a new importance.

Where do we go from here? That’s hard to say, but here is where I am at with this situation and what I would recommend. Personally, I think we should be cautious about canonizing him, and currently, I’d recommend against it. There are two reasons to be cautious.  First, we Orthodox need to give very serious consideration to whether his life expresses the kind of sanctity that we can truly and unequivocally recognize—even if he did not abuse his wife Charlotte. Let’s say he didn’t abuse her. Is there still enough here to canonize?  Is his story amazing and unique? Absolutely! It is a story of someone who saw the divine light in Orthodoxy, who saw the Orthodox Church as addressing his main concerns in life, who traveled and converted and who shared his story with others here in America. Is that enough to canonize someone? Perhaps, but I’m not yet sold on it. Second, there is the concern with spousal abuse. Did he abuse Charlotte? I found the court document very concerning. I realize our saints have sinned. Got it. I also realize some of them have committed large sins, but I also know that much must be done to outweigh that to such a degree that they can be upheld as exemplars. I’m not yet convinced that is the case for Fr. Raphael. I would recommend the prudent course. One can always canonize later. One really can’t backtrack once it’s done. Instead, let us study his case, let us read his letters after his journey to Russia and to Marcus Garvey. Let us be thankful for inspiring Patriarch McGuire and the ripple effect that caused. But let us also be sober and careful. Not canonizing someone does not mean not loving them or not respecting things they did and said. It simply means not canonizing them. We can remain prudent and still love him and pray for him.

Dellas Oliver (“Fr. Oliver”) Herbel serves as the wing chaplain for the North Dakota Air National Guard.  He obtained his PhD in historical theology from Saint Louis University in 2009 and maintains an active publishing record.