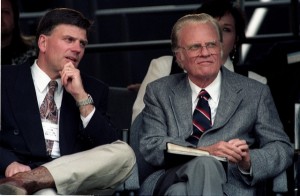 The Billy Graham Evangelistic Association is hosting an international summit on religious persecution in Moscow in collaboration with the Russian Orthodox Church. The summit, called ‘The World Summit in Defense of Persecuted Christians,’ will be taking place from October 28-30, 2016.

Franklin Graham announced on his Facebook page on Wednesday morning that ‘The World Summit in Defense of Persecuted Christians’ is called in view of rapidly increasing persecution of Christians around the world in recent years, as also documented by last year’s study on persecution by Open Doors, which found that 2015 was the worst year of Christian persecution.

Graham met the head of the Russian Orthodox Church, Patriarch Kirill, in Moscow last October, and explained why Russia was chosen as a host for the summit.

“No church in modern history has suffered more than the church in Russia. In the years under Communist rule, virtually all of the priests, pastors, and church leaders in Russia were imprisoned or executed by the Communists, and their graves are on the outskirts of Moscow and throughout the country serving as a reminder. So Moscow will be a fitting and meaningful location for this much-needed summit,” he said.

The summit is expected to be held towards the end of this year, when delegates from around the world from different denominations will come together to pray for persecuted Christians.

Patriarch Kirill said in an interview to RT, “I strongly believe that we should work together in order to save our society from de-Christianization-because, facing increasing atheistic pressure, which has become quite aggressive in some countries, Christians are being squeezed out of public life.”

“Christians are under pressure. Specifically, attempts are made to limit religious manifestations in public space. All this indicates that we are dealing with a dangerous, critical situation here, as regards Christian reality, Christian presence,” he continued.

Most of the recent persecution was driven by Islamic extremism and authoritarianism in Middle Eastern and African countries, which perpetrated imprisonments, beheadings, and forced evacuations.

A report by Open Doors said that an estimated 7,000 Christians died for their faith in 2015, which is double the number of killings and executions from the year before. According to the report, the countries which registered the sharpest surge in persecution were Eritrea, Pakistan, and Nigeria.