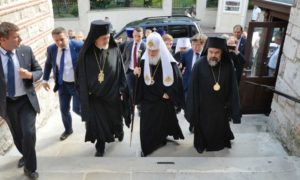 On August 31, 2018, His Holiness Kirill, Patriarch of Moscow and All Russia, arrived in Istanbul. The Primate of the Russian Orthodox Church visited the Patriarchate of Constantinople, where, accompanied by Metropolitans Emmanuel of France and Bartholomew of Smyrna, as well as Metropolitan Hilarion of Volokolamsk, head of the Moscow Patriarchate department for external church relations (DECR) and Archpriest Nikolay Balashov, DECR vice-chairman, he venerated the shrines of the Patriarchal Cathedral of the Holy Protomartyr George.

‘We are glad to receive today in the Ecumenical Patriarchate His Beatitude and Holiness Patriarch Kirill of Moscow and All Russia with his fellow travelers. Whenever we meet it is a joy for both of us because we have an opportunity to discuss matters of mutual concern.

We believe in the power of dialogue. If political leaders use dialogue to solve the problems of their countries, the more so we, religious leaders, should use the way of dialogue for solving problems. The more so that dialogue is a way shown us by God Himself.

We are glad that today’s visit of His Holiness Patriarch Kirill coincides with a meeting of the Holy Synod. So, the Holy Synod members are present here in full force. As you know, our Holy Synod meets monthly and the meeting continues for three days. And from tomorrow to Monday evening, there will be a Bishops’ Synaxis of our Church, which will be attended by all the diocesan archpastors of our Patriarchate.

The latest such Synaxis took place in 2015. The work was very successful, fruitful, and we decided then to gather together for such a meeting every three years. Tomorrow we will celebrate the beginning of a new church year with the participation of the Patriarch and all the hierarchs. On September 1, our church year begins; this date as the day of prayer for God’s creation was established by my predecessor Patriarch Demetrios of the blessed memory, and on this day we lift up special prayers for the environment. As you know, as part of this ecological initiative, the Ecumenical Patriarchate has held very important and serious symposia and conferences; the latest such symposium was held this June in the Attica region. We plan to hold a similar conference next June here, in Constantinople’.

In his speech in response, the Primate of the Russian Church noted,

‘Your Holiness, I am delighted to have this opportunity to meet with you and members of the Synod. Whenever I come to this place, I recall very important moments of our common history. In each epoch, our Churches encountered various challenges and problems, which stemmed, in the first place, precisely from the surrounding world, but we, by God’s grace, always found a common language, a common understanding of what should be done to preserve the unity of the Church and meet challenges of time.

That is why – despite the fact that there were all kinds of discussions in this building, sometimes rather difficult – I have very bright memories of this place because we have never done anything that could harm universal Orthodoxy, one Holy Catholic and Apostolic Church. Indeed, as Primates of Local Churches are responsible for the whole Church, for the whole Body of Christ.

I would like to thank personally you for the atmosphere you create here. I cherish warm memories of all our meetings beginning from 1977. I hope that the next generation of hierarchs will draw an example, among other things, from the history of our relations. We really used to go through enormous difficulties but always managed to reach necessary goals. Of course, it happened because, along with our infirm powers, present in this dialogue, in this enormous work, was the grace of God. We believe that now too the Lord will be with us.

I would like once again to wholeheartedly greet you, Your Holiness, and beloved archpastors – members of the Synod’.

Then, in a private confidential talk, the Patriarch exchanged opinions on a wide range of issues concerning the consolidation of inter-Orthodox unity and development of common Christian witness in the modern world. Participating in the talk were Metropolitan Emmanuel of France and Metropolitan Hilarion of Volokolamsk.

On the same day, His Holiness Patriarch Kirill returned to his homeland. At the airport, he was seen off by Russia’s Extraordinary and Plenipotentiary Ambassador to Turkey A. Yerkhov and Russia Consul General in Istanbul A. Podjelyshev, as well as representatives of the Patriarchate of Constantinople. Before his departure, the Primate of the Russian Orthodox Church answered questions from journalists.

According to His Holiness, for the two years that have passed since the previous meeting of the two Primates, ‘much has happened in the life of our Churches, and the whole situation in the world has greatly changed’.

Having described the dialogue that took place between them as ‘a talk between two brothers’, Patriarch Kirill stated that they discussed ‘all the problems on the agenda’.

‘I hope we will continue working together so that the world may become better’, he added.

‘Without coordination with His Holiness, I would not like to let you into details, although there was nothing secret’, Patriarch Kirill specified, ‘it was a very correct talk – a talk between the Primates of two Churches who are aware of their responsibility for the state of Universal Orthodoxy and for the state of human souls in the places and countries under our responsibility’.

Speaking about a continuation of pan-Orthodox dialogue, His Holiness emphasized that ‘problems keep emerging, challenging Churches from the pastoral point of view. The world is changing very rapidly, and no Church can make decisions that would run contrary to the position of another Orthodox Church’.

‘Therefore, we are simply programmed for interaction and cooperation, and since the world is rapidly changing, this cooperation, too, should be dynamic enough’, His Holiness concluded.

Among the persons who accompanied His Holiness during his trip were Metropolitan Hilarion of Volokolamsk, head of the department for external church relations (DECR), Archpriest Nikolay Balashov, DECR vice-chairman, Rev. Nikolay Volkov, head of the Patriarchal Press Service, and Rev. Anatoly Churyakov, DECR staff member.

His Beatitude Patriarch Kirill of Moscow at the Phanar 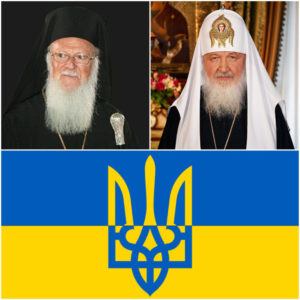 On Friday morning, August 31, 2018, following his communicated desire, His Beatitude Patriarch Kirill of Moscow and All Russia, accompanied by His Eminence Metropolitan Hilarion of Volokolamsk, the Reverend Protopriest Nikolai Balashov and the Reverend Presbyter Anatoly Churyakov, interpreter, arrived at the Phanar in order to deliberate with His All-Holiness Ecumenical Patriarch Bartholomew on matters of inter-Orthodox concern.

Patriarch Kirill was greeted at the airport by His Eminence Metropolitan Gennadios of Sassima and the Very Reverend Grand Archimandrite Vissarion, Archivist of the Patriarchate.

His Beatitude proceeded to the Ecumenical Patriarchate, where he was greeted by Their Eminences Metropolitans Emmanuel of France and Bartholomew of Smyrna, as well as the members of the Patriarchal Court, led by the Very Reverend Grand Chancellor Andreas. After paying his respects at the Venerable Patriarchal Church, he was received by His All-Holiness in the Chamber of the Throne, in the presence of members of the Holy and Sacred Synod and other Hierarchs, who had traveled to the Phanar to participate in the Synaxis of the Hierarchs of the Ecumenical Throne on the feast of Indiction.

His All-Holiness warmly welcomed His Beatitude to the courts of the Mother Church, recalling their spiritual fathers, Elder Metropolitan Meliton of Chalcedon and Metropolitan Nikodim of Leningrad of blessed memory, and all those who have worked for bilateral relations between the two Churches, as well as inter-Orthodox relations in general. He emphasized the importance of dialogue as a God-given means towards overcoming emerging challenges. His Beatitude responded by expressing the deep emotion and vivid recollections of past visits to the Queen of Cities and his collaboration with His All-Holiness.

The two Primates then held a lengthy private discussion in the Patriarchal Office together with Their Eminences Metropolitans Emmanuel of France and Hilarion of Volokolamsk, Chairman of the Moscow Patriarchate Department for External Church Relations.

At the conclusion of their two-and-a-half hour conversation, His Beatitude departed for Moscow.