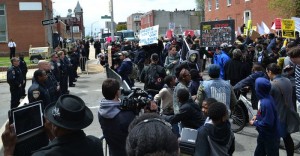 The Baltimore Council of Orthodox Churches sent a statement to the city of Baltimore condemning violence, but “encouraging the faithful, and all Baltimore citizens, to engage their constitutional rights and to follow their conscience in regard to participation in lawful and peaceful assemblies addressing perceived injustice, inequity, or concerns and grievances with the status quo.”

The Annunciation Cathedral faithful gathered for a special prayer service for the city, after the divine Liturgy on May 3, 2015.

The following statement was composed and sent to Baltimore City Hall on May 2, 2015, after Baltimore-area clergy and laity met to discuss the city’s recent turmoil in the aftermath of the death of Freddie Gray.

STATEMENT TO THE CITY OF BALTIMORE

“Every kingdom divided against itself is laid waste, and a divided household falls.” (Luke 11:17)

Countless Orthodox Christians have called Baltimore their earthly home for more than a century. Many of our ancestors and contemporaries fled to this country to escape poverty, persecution, oppression, imprisonment, torture, and murder, and to find a new life in a land that held the promise of peace, prosperity, and the rule of law. As devoted citizens of this city, we have of course been moved by the tragic death of Freddie Gray and the events that it has sparked.

It is with one voice that we Orthodox Christians add our prayers for healing, reconciliation, and peace in Baltimore.

In the name of Jesus Christ,

We therefore humbly, but resolutely, call upon all our fellow citizens to join us in honest, dispassionate self-appraisal and reflection, to aspire to the greater good of self-emptying love and forgiveness, to encounter one another in dialogue with mutual respect so that we might, as a city, progress in a concerted movement toward the goal of lasting harmonious coexistence and genuine neighborly and brotherly love.

To this end, we encourage our faithful, and all Baltimore citizens, to engage their constitutional rights and to follow their conscience in regard to participation in lawful and peaceful assemblies addressing perceived injustice, inequity, or concerns and grievances with the status quo. Likewise, we encourage and support our duly elected officials and appointed law enforcement agencies in their efforts to govern, serve, and protect our city lawfully and honorably, as so many have done and continue to do.

We are told that “faith by itself, if it has no works, is dead” (James 2:17). In addition to prayer and the words expressed here, our communities are committed to ongoing support of and involvement in numerous and various Baltimore-area charities. International Orthodox Christian Charities (IOCC), based in Baltimore, already has been able to distribute six thousand health kits to those in need in our city over the past week. However, the city’s needs extend far beyond current events and material goods, and we resolve to be attentive to them and to adapt our assistance as needed.

We stand firm in prayer before God and in service to this great city. Orthodox parishes in the Baltimore area will offer a special prayer for our city on Sunday, May 3, following the Divine Liturgy. We look forward to a bright future in Baltimore, and fervently ask God for His mercy and guidance to allow all people to do His will, for there to be peace on earth and goodwill among mankind.