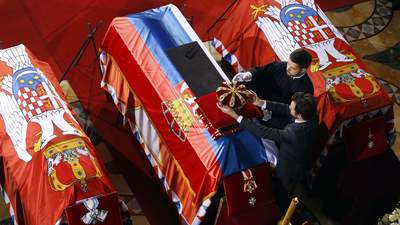 Hundreds of mourners including Serbian government officials have attended a state funeral for deposed King Petar II Karadjordjevic decades after his death in exile.

The reburial of the king and other members of the former royal family is seen as an important act of national reconciliation.

The bodies of Petar, who went into exile in 1941, his wife Queen Aleksandra, mother Queen Maria and brother Prince Andrej, had been exhumed from cemeteries in the United States, Britain and Greece.

The four coffins, draped in Serbian royal flags and escorted by Serb army guardsmen, were transferred to the Oplenac royal chapel in the southwestern town of Topola.

Petar, then aged 11, succeeded his father King Aleksandar, who was assassinated in Marseilles, France, by Croatian and Bulgarian nationalists, in 1934.

After Nazi Germany invaded Yugoslavia in April 1941, Petar fled the country and spent the most of World War Two in exile in Britain.

After the war, Petar was proclaimed a traitor by the communist leadership, which also abolished the monarchy.

His property was confiscated and he remained exiled until his death in 1970, aged 47, in the United States.

He was buried at a Serbian Orthodox Church monastery in Libertyville, Illinois – the only European monarch laid to rest on US soil.

President Tomislav Nikolic, Prime Minister Ivica Dacic, Patriarch Irinej and the head of Serb Orthodox church were among those attending the state funeral.

The ceremony was an act of reconciliation between Serbs who supported the royal family or communist forces during World War Two.

Tens of thousands of people died in Serbia between 1941 and 1945 in a civil war between royalist guerrillas and communist partisans who also fought the German occupiers.

The two camps are still at odds decades after the war.

“More Serbs were killed by the Serbian hand than by the hand of the occupier,” Mr Nikolic said in a eulogy. “We cannot, we must not allow divisions and injustice anymore.”

After the war, royalist supporters were killed or persecuted by the government of Josip Broz Tito.

Petar’s son, Crown Prince Aleksandar Karadjordjevic, and his family were allowed to return to Serbia in mid-1990s by Slobodan Milosevic as Yugoslavia disintegrated.

“This funeral was the fulfilment of historic justice. They had to be brought home,” said Zoran Kotarac, a mourner from the village of Slankamen, north of Belgrade.