COMMENTARY: That Ecumenical Patriarch Bartholomew of Constantinople would travel to Warsaw to stand alongside a Catholic bishop to call out the Russian Orthodox Patriarch Kirill is altogether remarkable. 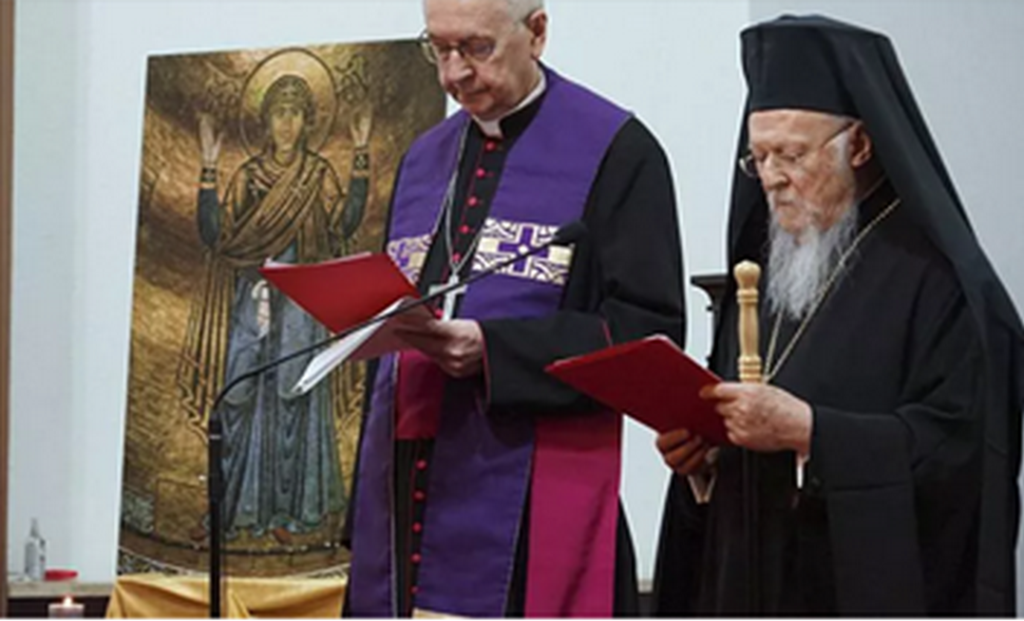 cumenical Patriarch Bartholomew I (r), the spiritual leader of the world’s Orthodox Christians, and Archbishop Stanisław Gądecki, the head of the Catholic bishops’ conference of Poland, pray together during a meeting with Ukrainian refugees in Warsaw, Poland, on March 29. (photo: Press Office of the Polish Bishops’ Conference / Associated Press)

The aftershocks of the “ecclesial earthquake” were not long in coming.

On Friday, Pope Francis consecrated Ukraine and Russia to the Immaculate Heart of Mary. On Sunday, the Ecumenical Patriarch Bartholomew of Constantinople was in Warsaw.

What connects the two events? Neither the Bishop of Rome nor the patriarch of the “New Rome” — Constantinople — take into account any longer possible objections from Moscow, which styles itself the “Third Rome.”

The timing and manner of the Holy Father’s consecration of Ukraine and Russia were possible because Russian Orthodox sensitivities are no longer given deference. Patriarch Kirill of Moscow, in blessing Russia’s war of aggression against fellow Orthodox and fellow Slavs in Ukraine, has lost all credibility as an ecclesial figure and ecumenical partner.

Bartholomew had already felt the sting of Kirill’s cult of pseudo-czarist, quasi-Soviet imperialism. In 2018, when Bartholomew, first among the Orthodox patriarchs, recognized an Orthodox Patriarch Filaret of Kyiv autonomous from Moscow, Kirill broke off communion with Bartholomew and declared him in schism. Bartholomew stood his ground but was careful not to further inflame tensions in the fractured Orthodox communion.

No longer. Bartholomew traveled to Europe’s most Catholic country to stand in solidarity with and to bless the 2.3 million refugees from Ukraine in Poland, most of them Orthodox. He came at the invitation of Catholics, to praise them for giving succor to Orthodox Christians under attack from Russia, another Orthodox country.

In a truly remarkable address at the presidential palace in Warsaw, Bartholomew explained the extraordinary circumstances of his visit.

“My exclusive focus these days is to stand in solidarity and prayer with the millions of refugees who have been forcibly displaced by the ongoing unjustified and unjustifiable aggression as well as the horrendous and costly violence caused by Russia on their sovereign homeland of Ukraine,” the patriarch said to Polish President Andrzej Duda.

“I am here to meet with some of the many refugees and to encourage those who are demonstrating the ultimate Christian virtue of love for their neighbor and charity for every stranger, in whom we are called to witness and welcome Christ himself.”

That he said as a fellow Christian. Then he spoke as the leader of global Orthodoxy:

What I would like to emphasize first of all, Mr. President, is my personal gratitude — but especially the appreciation of the Orthodox faithful, and indeed the admiration of every decent human being — for the generous and compassionate hospitality of your historical and magnificent nation to those who were forced to flee Ukraine.

Let me assure you that the entire world has watched as Poland — and other surrounding nations within this blessed continent — has literally opened the borders of its land and the depths of its heart to receive and comfort women and children, elderly and unaccompanied minors, and even pets. You did not just consign your refugee neighbors to tents and camps; you embraced them in your places of residence and your living rooms.

That an Ecumenical Patriarch, speaking in the name of “every decent human being,” would side with Poland — the Latin Slavs — and Ukraine — the Byzantine Slavs — against Russia would have been unthinkable even a few months ago.

As if that were not enough, Bartholomew followed his Monday visit to Duda with a Tuesday visit to the residence of Cardinal Kazimierz Nycz of Warsaw, where he met with and prayed together with Archbishop Stanisław Gądecki, president of Poland’s Catholic bishops’ conference.

Archbishop Gądecki, after characterizing Russian attacks as having “the hallmarks of genocide,” then not so subtly charged Russia, in Bartholomew’s presence, with committing spiritual fratricide.

“In this war, two Christian Slavic nations are fighting each other, and yet they have the same baptismal font: the baptism of St. Vladimir the Great, prince of Kyiv, who, in 988, received it from Constantinople, the capital of the Christian East,” Archbishop Gądecki said. The Polish prelate further noted that he personally wrote to Kirill, asking whether it was “permissible to destroy the cradle of Christianity on Slavic soil, the place where Rus was baptized.”

That Bartholomew comes to Rome often to pray with the Holy Father for unity and to advance common projects is no longer remarkable. That he would travel to Warsaw to stand alongside a Catholic bishop to call out the Russian Patriarch of Moscow is altogether remarkable.

The tectonic plates have shifted; the aftershocks are serious. And there are more to come.