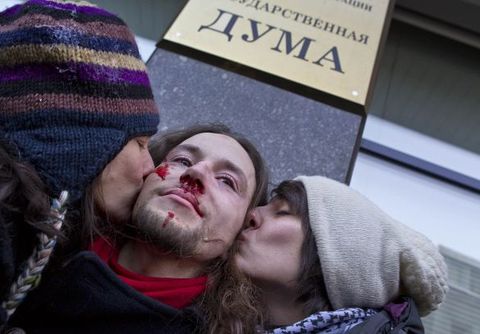 MOSCOW – A demonstration outside the State Duma on Tuesday ended in fisticuffs as Orthodox activists clashed with opponents of a bill targeting lesbian, gay, bisexual and transgender people.

Police and at least one Duma deputy intervened to halt the violence.

About 30 LGBT activists met at noon on Georgiyevsky Pereulok for an event they called “Kissing Day” to protest a proposed ban on “homosexual propaganda.” Gay and lesbian couples posed for photographs at the entrance to the Duma building while kissing.

But Orthodox activists showed up at the event and tried to break it up, throwing eggs and ketchup at the couples and even attacking them when they started to kiss. Several journalists were also attacked.

The gay activists were protesting a bill that stipulates fines for promoting homosexuality among minors. The bill was introduced in the Duma in March by Novosibirsk regional lawmakers. Discussion of the bill by the Duma had been scheduled for Tuesday but was pushed back.

“This bill and the Duma that wants to consider and pass it is not the choice of society, which is tolerant, unlike the deputies who want to ban us from being ordinary people and equate us with pedophiles,” activist Sergei Ilupin said.

The debate over gay rights came into the national spotlight last year after St. Petersburg city legislators passed a law similar to that proposed in the Duma. The St. Petersburg statute instituted fines for the promotion of homosexual relationships among minors, and it essentially bans gay pride parades.

Several regions, including Novosibirsk, Ryazan, Arkhangelsk and Kostroma, already have similar laws on the books.

The nationwide proposal has pitted gay activists and human rights groups against conservative forces lobbying for the ban. The Russian Orthodox Church is one of the measure’s most prominent supporters.

“These people are unhealthy, so they must stay quiet and be treated,” said former actress Galina Simonova, who came to Tuesday’s event to show support for the Duma initiative.

Several Duma deputies witnessed the brawl between activists, and Ilya Ponomaryov of A Just Russia tried to break up the fight. Former boxer Nikolai Valuyev, a deputy with United Russia, stood passively by and smiled before going inside the building, Itar-Tass reported.

Police did not block the gay activists from standing in front of the Duma building but stepped in when fighting broke out, arresting at least five Orthodox activists by the end of the protest.

The fighting continued even after gay activists had walked away from the Duma. Several Orthodox activists attacked two gay demonstrators inside the Okhotny Ryad metro station.

LGBT rallies protesting the bill were held in several other cities Tuesday as well, including St. Petersburg, Voronezh, Arkhangelsk, Tomsk, Syktyvkar and Samara.

In Arkhangelsk, gay activists gathered on a city square in folk costumes and proclaimed that “LGBT values don’t differ from heterosexual values.”

On Monday, discussion of the bill by parliamentarians was pushed back to Friday, the latest in a series of delays in bringing it to the Duma floor.

“Something in it raises questions,” A Just Russia faction head Sergei Mironov said in explaining the postponement, Interfax reported.

Ahead of planned discussion of the bill last month, LGBT activists held a demonstration that also ended in bloodshed. Several gay activists were detained by police, including Yelena Kostyuchenko, an organizer of Tuesday’s event and a reporter for opposition newspaper Novaya Gazeta, who spent two days in jail afterward.

“We hope that eventually the bill won’t even be considered by the Duma,” Kostyuchenko said. “But if it is, we’ll come again.”