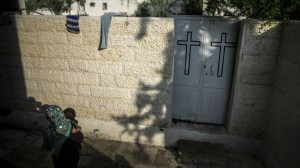 A Palestinian woman carrying an infant is pictured at the entrance of Gaza City’s Greek Orthodox church compound on July 23, 2014 where around 600 people, mostly women and children, are sheltering (photo credit: AFP/Marco Longari)

Source: The Times of Israel

BY TIMES OF ISRAEL STAFF

Gaza City’s Greek Orthodox church compound, a site that sheltered hundreds of Palestinians who fled their homes during IDF shelling in the area, was used by members of Hamas to launch rockets at Israeli territory, a prominent Christian leader in the Strip said Wednesday.

When the Israeli army expanded its offensive in the Palestinian enclave several weeks ago, Archbishop Alexios of the Saint Porphyrios church made the decision to open the holy site’s doors in a show of interfaith solidarity, offering food, drink and shelter to all Gazans, regardless of their religion.

But now, as both the IDF and Hamas have held their fire for over two days in compliance with an Egypt-brokered 72-hour ceasefire, a frightened Alexios claimed that even with Palestinians crowding the church, Islamist fighters had set up a rocket launching site in the compound, CBN News reported. Alexios went on to point out to CBN News reporters a roof terrace outside his office where he claimed rocket launchers had been set up. Citing security concerns, the archbishop refused to disclose any further details regarding Hamas activity in the area.

On July 21, five or six Israeli shells slammed into the church compound, as well as a nearby mosque, apparently in response to rocket fire from the site.

Alexios stressed that he did not wish to take sides in the conflict between Israel and Hamas, adding that he only sought to offer help to the people of Gaza, CBN reported.

“We are disciples of Jesus, we must give love to everyone without condition,” he said.

“There’s a lot of anger on the street. We need forgiveness and love to flow,” added Alexios.

Gaza’s once thriving Christian community has dwindled in number to around 1,500, most of them Greek Orthodox, out of a predominantly Sunni Muslim population of over 1.7 million. The Christian community in the Mediterranean seafront city, like their counterparts elsewhere in the Middle East, has been shrinking due to both conflict and unemployment.

Nearly half a million Palestinians out of Gaza’s 1.8 million people were displaced by Israeli bombardment, and many are still sheltering in schools after their homes were flattened in the offensive. Some residential neighborhoods were particularly hard hit by the Israeli army because of the Hamas practice of placing rocket launchers among homes, schools, hospitals and mosques, according to Israeli officials.

AFP contributed to this report.