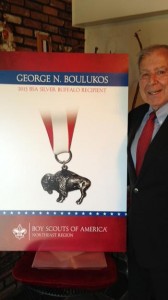 Boulukos has been a lifelong Boy Scout, working tirelessly to promote the goals and objectives of the Boy Scouts of America. He was born and raised in Merrick, NY, and resides with his family in Freeport, NY. He has served the Boy Scout program on many levels, working within his community and throughout the United States on district, national, and international programs and activities. In recognition of his sixty years of service, the National Court of Honor and the National Executive Board selected him to receive the Silver Buffalo Award for all he has done for Scouting and the youth of America.

The Award was presented at the recent National Annual Meeting, held in Grapevine, Texas, in appreciation for his years of exceptional service to youth. It is the culmination of many other awards that Boulukos has received over the years, including the Distinguished Eagle Scout Award and the Silver Antelope.