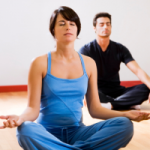 Yoga is growing in popularity in Georgia, particularly among Georgians who have traveled abroad – or those who are seeking help with back pain. But the growing interest has also provoked some concern from Georgian Orthodox priests, who think the practice could lead churchgoers astray

A growing number of Georgians are turning to yoga to shake off the stress of daily life. But their quest for inner calm and smaller waists is generating hostility from the powerful Georgian Orthodox Church.

Over the past two years, yoga has gone from a largely unknown Eastern tradition to a popular fitness routine in the Georgian capital, Tbilisi. Georgian National Yoga Federation President Giorgi Berdzenishvili, a passionate practitioner for the past 15 years, called the trend a “dynamic” process that started under former Soviet leader Mikheil Gorbachev’s glasnost’ policies in the late 1980s.

During the Soviet era, when religious beliefs were discouraged, yoga tended to be viewed as a fringe health-oriented practice, devoid of spirituality, Berdzenishvili noted. But slowly, over the past several years, amid increased Internet usage and travel abroad, yoga has moved into the mainstream in Georgian society.

Today, yoga’s popularity is at an all-time high, instructors say. Classes are full, leading to the opening of several new studios in Tbilisi over the past year. This phenomenon has some Georgian Orthodox priests worried, due to yoga’s spiritual roots in Hinduism, and its perceived association with Buddhism.

While the Patriarchy, the body that governs the Georgian Orthodox Church, did not respond to requests from EurasiaNet.org for the Church’s official position on yoga, dozens of websites devoted to the faith have published articles and blogs that are critical of the practice.

Orthodoxy.ge, a website run by priests at Sioni Cathedral, the former headquarters of the Georgian Orthodox Church, warns the faithful that yoga is full of false “charms” that lure people away from God.

In a long entry entitled “Eastern Culture,” the priests caution that even people who perform “simple yoga exercises … gradually develop some spiritual thoughts” (a broad reference to meditation) that are not compatible with Christianity.

The Church is widely viewed as the most trusted institution in Georgia, and, by extension, Georgian Orthodox priests often wield considerable influence, providing guidance on everything from family planning to purchasing a car.

Local yoga instructors told EurasiaNet.org that priests’ concerns about yoga have stopped some Georgians from taking up the discipline, and have prompted others to abandon it. Mariam Ubilava, a certified yoga teacher at Sun Yoga Tbilisi, said that newcomers often ask before class if meditation is part of the program. “Georgians don’t like meditation so much,” Ubilava said. “Georgians are very strong in their religion and they think if they start meditation, this is related to Buddha and India, and they avoid [it].”

Three years ago, when 38-year-old Nino Kokosadze decided to take up yoga, she noticed that some of the women attending her early morning yoga classes bowed out of the group after their priests “forbade” them from attending.

Kokosadze, who turned to yoga to help with chronic back pain, decided after a few lessons to check with her priest as well. “I am Orthodox, a religious person and already six years I am attending church,” she said during a break at an outdoor yoga session not far from downtown Tbilisi. But Kokosadze’s priest took a more tolerant view. “I told him that some priests prohibited it,” she recounted. “He said that those who know what is yoga won’t prohibit it.”

Many Georgians simply need more information about yoga and meditation, said yoga instructor Ubilava. “[Meditation] doesn’t mean that you become Buddhist or following [sic]the Buddhist religion. It means you forget your daily life, meditate on something.”

Nidhin Kochath Sugathan, a yoga instructor from the Indian state of Kerala, agrees, saying he’d encountered the same concern when he started teaching at Tbilisi’s Yoga Ananda studio. “Georgians had the wrong knowledge that yoga means sitting in the lotus position and chanting only,” Sugathan said.

With time, as practitioners realized that “[b]y chanting one ‘Om,’ they’re not going to change their religion,” the objections vanished, he said.

Nonetheless, after conversations with priests, National Yoga Federation President Berdzenishvili decided to develop a more culturally sensitive version of yoga practice for use in the federation’s classes; one that focuses on fitness, rather than meditation, and does not encourage participants to adopt yoga “spiritual names” or specific forms of dress.

Olga Ramer, the owner of Tbilisi Yoga Cave, one of the first yoga studios to open in the city, noted, that most Georgians today appear as interested in both the spiritual and physical aspects of yoga. “I would say there are more expats who are interested just in [the]physical part,” Ramer said. “The locals who come are actually very spiritual and they want both the physical and the spiritual.”

Those dual aspects of yoga have paid off for Kokosadze, who says that, after three years of regular yoga practice, her back is feeling better and her spiritual life has improved with the stronger powers of concentration acquired from yoga. The three-hour church services she attends each week “pass like a minute because now I am focused on what is happening.”

“[Yoga] has really helped me to concentrate on the main thing,“ she said. “You realize what is the most important in your life.”

Editor’s note: Molly Corso is a freelance journalist who also works as editor of Investor.ge, a monthly publication by the American Chamber of Commerce in Georgia.