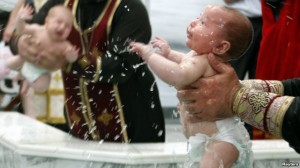 Georgia’s Orthodox Church has urged the government to ban abortion to address the growing problem of gender imbalance caused by sex-selective abortions. But is an outright ban the solution?

By Temur Kiguradze and Robert Coalso

Together with its neighbors in the South Caucasus — Armenia and Azerbaijan — Georgia is on a trajectory to develop a gender imbalance on par with what has been observed in India and China.

That kind of imbalance brings myriad social problems, from trafficking of women, to increased levels of violence and instability, to outbreaks of AIDS and other sexually transmitted diseases.

The lopsided numbers are the result of sex-selective abortions — couples using ultrasound and other technologies to determine the sex of their fetus and to abort it if it is not the gender they desire. And, around the world, most couples desire boys.

“Those figures really took demographers by surprise. No one had expected sex selection to spread to that area, but as in much of East Asia, the abortion rate is quite high,” says Mara Hvistendahl, a journalist and author of “Unnatural Selection: Choosing Boys over Girls, and the Consequences of a World Full of Men.”

“The new prenatal diagnostic technologies have come in as these countries develop. And the birthrates have also fallen very rapidly in these areas. These are the same trends that we saw decades earlier in East Asia and now they are hitting the Caucasus region.”

Lawmakers in Tbilisi are expected to soon begin discussing a possible legislative response to the problem. Dimitri Khundadze, chairman of the parliament’s Health and Social Protection Committee, is pushing fellow lawmakers to take the issue seriously and find a way to ban sex-selective abortion, which he says accounted for about one-third of the 36,000 abortions performed in the country last year.

According to World Health Organization and UN data from 2005, Georgia has 19.1 abortions per 1,000 women of reproductive age, one of the highest rates in Europe, although it is in the middle among former Soviet countries. The average woman in Georgia will have three abortions in her lifetime.

To Ban Or Not To Ban

Conservative forces in Georgia, including the influential Orthodox Church, see a broader problem and are urging an outright ban on abortions.

In his Easter message this week, Patriarch Ilia II declared: “This happens because of the desire and decision of the parents. It is a horrible murder of an innocent, helpless creature. And the doctor is an accessory to this murder. When the country is in such a difficult demographic situation, I think that the government must pass a law banning abortions, with just a small number of exceptions, of course.”

Feminists and other women’s advocates see the debate as a question of fundamental women’s rights. Tbilisi-based gynecologist Mzia Gambashidze says abortion bans are dangerous and counterproductive.

“No bans! We had one under the communists and how many people died from unsanitary, illegal abortions? How many doctors were thrown in prison for performing them?” she asks. “This is not a way out of the current situation.”

Gambashidze urges greater family-planning education to reduce the abortion rate. She recounts seeing patients who wanted abortions because they had been advised by their Orthodox priests not to use birth control.

Nina Tsikhistavi, head of the Caucasus Women’s Network NGO, says the right to abortion must remain sacrosanct, although she, too, is concerned about the alarming figures on sex selection.

Is Development The Answer?

Lawmaker Khundadze agrees that an outright ban is no solution. “It is impossible to completely ban pregnancy termination, since that would increase the number of abortions done unprofessionally and that would lead to more deaths,” he said. “We will consider this topic together with the appropriate specialists at a session of my committee.”

Prime Minister Bidzina Ivanishvili responded to the patriarch’s Easter message by saying an abortion ban was not the solution to Georgia’s demographic woes. He said improvements in the average standard of living were the surest way to reduce the number of abortions.

Ivanishvili’s prescription on its own, however, might not address the sex-selective abortion problem. Journalist Hvistendahl says the long-held belief that sex selection is something practiced by the poor is not borne out by the evidence.

“What is actually happening is that sex selection is something that hits first in urban areas, in rapidly developing countries, not in the poorest places in the world,” Hvistendahl explains. “That is why it hit China, that’s why it hit India. And that is why it is now hitting parts of Eastern Europe. And when it hits those countries, it is the elite that takes up the practice first.”