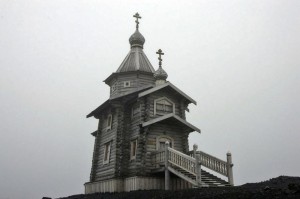 From the scorching deserts of Sinai to the frozen tundras of Siberia, Orthodox Christianity has a history of building its churches and monasteries in inhospitable places. But only a few can rival Trinity Church on King George Island. The southernmost Orthodox church in the world, Trinity was built near Bellingshausen Station, Russia’s permanent outpost in Antarctica.

In the mid-1990s Patriarch Alexius II of Moscow gave his blessing for this audacious project. The church was constructed in Russia and transported by a supply ship to its present location. One or two monks from Troitse-Sergiyeva Lavra — considered the most important Russian monastery as it is the spiritual center of the Russian Orthodox Church — volunteer to man the church year-round.

While most of buildings on this continent are built to hug the ground in order to reduce their exposure to the polar wind, this church proudly stands 50 feet tall. It is a wooden structure built from Siberian pine and carved in the traditional Russian style by master carpenters of Altay.

The priests manning the church take care of the spiritual needs of the staff of nearby Russian, Chilean, Polish, and Korean research stations. Their obligations include praying for the souls of 64 Russians who lost their lives in various expeditions, and the very occasional, very chilly, baptism.

While the church is large enough to accommodate 30 visitors, it is rarely filled to capacity. In 2007, however, the church performed its first wedding — the first wedding ever celebrated in a church in Antarctica — between Chilean and Russian researchers.

More on Trinity Church can be found on Atlas Obscura.