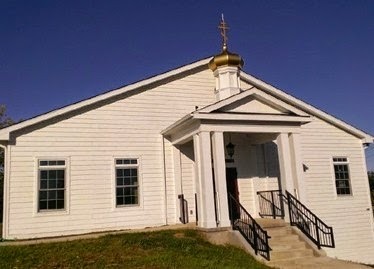 Just after Christmas I had the pleasure of worshipping at this beautiful little church, St. Athanasius Russian Orthodox Church in Nicholasville, KY.  When a plan to sub for one of my Episcopal colleagues fell through, I decided to attend this beautiful church; one of my students at the University of Kentucky is Orthodox and had invited me to attend anytime I wanted.  (That’s called evangelism, folks!)

As I stood for the Divine Liturgy—there is no sitting during Orthodox worship—I was moved, both by the chants of the priest and choir, as well as the devotion and care that went into this celebration of the oldest and holiest of Christian services.  I found a sense of peace and comfort in this service that my tradition calls Holy Eucharist, Mass, or simply Communion.

I took in all of the incense, watched parishioners venerate their icons.  It was all for the glory of God.  Did God need it all?  Of course not.  But God deserved it.  God deserves everything we can possibly give God, in our worship and our day-to-day lives. Go big or go home, right?  I wonder sometimes if we Christians have forgotten that.  I wonder if we have become complacent, even lazy, in expressing our faith.

The Divine Liturgy that day lasted two hours—at least one hour longer than almost every Episcopalian would say a Eucharistic service should last.  The people in that space took great care with every cross and every genuflection.  Even after the service was over and the priest had made the announcements, the people lined up single file to venerate an icon in the center of the worship space.  Nobody was in a hurry.  Everyone there knew that he or she was in the midst of the holy.  Everyone had taken a step out of time into a sacred space that did not seem the least bit concerned with the outside world around them.  This was devotion in its purest, most beautiful form.

As folks filed downstairs to a hearty lunch, I spent time with the priest.  During the liturgy he had been decked out in an assortment of vestments (cassock, pectoral cross, sticharion, epimanikia, epitrachelion, zone, and phelonion), and as I had watched him celebrate I wondered about my own tradition.  How many of my colleagues have I witnessed who have complained about doing so much as wearing a clerical collar?  How many would look at this and say that it was overkill?

After lunch we sat and talked, he in his cassock, collar, and pectoral cross, and me in my civilian clothes.  As I walked to the car to head home a thought hit me:  we’ve become lazy.  We have forgotten that being a Christian takes intentionality, it takes work.    It begins with something as simple as priests deciding that all of those aforementioned vestments are just too uncomfortable, too hot, and so they get simplified.  But where does it stop?  I have been in churches where leadership has talked about not wanting to keep people too long for worship.  Really?!  We’re actually willing to shorten our worship, which is supposed to be about God and not ourselves?  Before we realize it our very lives become lip service, and we lose sight of who we really are.  We lose our identity.

I went to a bar a few days later.  The bar that stands across the road from a huge megachurch, and as I sat there, again in civilian clothes, the bartender was having a conversation with a couple sitting near me.  They were talking about how hypocritical churches and their pastors are, how all they care about is money and maintaining their image.  The bartender pined, “I wonder if any pastors actually believe in God.”  I sat there in silence as he launched into a litany of things Christians have neglected—the care of the poor, the respect of those with whom they disagree, the message of love that Jesus gave.  He concluded his homily by telling us that he had actually pondered becoming a pastor, but when he saw how Christians were not living up to the very standards they had set, he knew he couldn’t do it.

Standards.  What kind have we set for ourselves and our communities?  We talk about church as though it were a glorified country club that sometimes mentions Jesus.  We worry about butts in the pews and bucks in the plate, rather than making disciples and cultivating relationships with the living God.  We worry about being comfortable, in the manners in which we both dress and preach.  Are we really being authentic when we neglect the standards upon which our faith was grounded?

I greatly admire our Orthodox brothers and sisters.  They know who they are.  They live into it each and every day.  They realize that being a Christian is not meant to be easy; it takes work, dedication, and a willingness to get uncomfortable.  While I may not be wearing a pectoral cross or phelonian the next time I celebrate Mass, I do pray that I may be authentic.  I pray we all may be authentic.  Don’t stray from what our faith asks of us just because it makes us a little uncomfortable.  It is a slippery slope that leads to making cynics like that bartender, rather than authentic followers of the Lord Jesus.

Let’s take our faith seriously.  No, God doesn’t NEED it.  But God certainly DESERVES it.