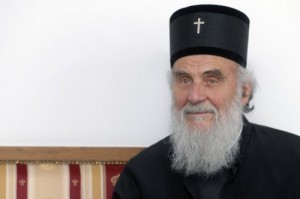 MOSCOW – Patriarch of the Serbian Orthodox Church Irinej said, at the end of his visit to St. Petersburg and Moscow, that Serbia is not running away from Europe, but that it cannot enter “in such a Europe” under the imposed conditions.

“We do not have the right to deny our spirituality, culture, all those things that make us people. That is why I hope that the people will bind to its church and be thankful to God for giving them the opportunity to save their apostolic faith,” said Patriarch in an interview for Voice of Russia, saying that Serbia will in time be even stronger, both on spiritual and political plan.

When asked is it possible to save orthodox roots in Serbia after joining EU, Patriarch said that “spiritual condition of Europe now is very poor”.

“There, as Friedrich Nietsche said, ‘God died’. True, there are some little islands of church life. And one cannot be without diaspora: Serbian, Russian, Greek. That is why I feel words one of the Roman Catholic bishops said: You don’t need us, but we need you.” This, in principle, is not so strange,” said Patriarch.

“There was a time when one people were for the church, and the others against it. It all develops down a spiral. First comes the sin, and then rebuilding. This repeated in history many times,” said Irinej.

The Patriarch, who went to Russia for a 13-day-long visit, said he was especially pleased he participated in the holy liturgy in honor of the 1025th anniversary of the baptism of Russia.

“I am happy I was here and saw what I saw. I hope this was not my last trip to Russia and that we will visit places where, unfortunately, we couldn’t visit this time. But I can tell you one thing: from the Christian point of view, we got a very, very positive image of Russia,” he said.

According to him, Russia has changed a lot since he, as Bishop of Nis, attended funeral of the Bishop of Moscow and whole Russia, Pimen in 1990. “Now this is a completely different country. It resurrected, it has lot of churches and monasteries. And the people is now with their church,” said Serbian Patriarch.

The head of the Serbian Orthodox Church describes relations between Serbian and Russian Orthodox Church as “relations between brothers and sisters”. “They have been wonderful in the past, and they are also now in the modern age. We all remember how many Russian citizens, fleeing from the October revolution, came to Serbia where they were greeted as brothers. Those were not only people who served the church, but also scientists and philosophers. They were worldly people, but very close to the Church,” he said.

Patriarch Irinej also said that his teacher of Russian language was Michael Borowski, who graduated on the Spiritual Academy in Russia. “And now our students are studying in Russia, and Russian students in Serbia. This way, they help us strengthen our ties.”

“His Holiness Patriarch Kirill knows our church very well and what’s even more important for us – situation in Kosovo and Metohija,” concluded Patriarch Irinej.