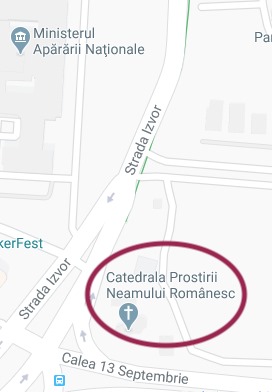 Google in Romania has been fined €2,000 after an internet user tagged the country’s massive new Orthodox cathedral with an insulting post on Google Maps.

Romania’s National Anti-discrimination Council (CNCD) imposed the fine on June 17 after the People’s Salvation Cathedral in Bucharest was given a new tag that renamed the unfinished €110 million mega-project “The Cathedral for making a fool of the Romanian nation”.

The cathedral, which was inaugurated in 2018 but is not expected to be finished until at least 2024, has been controversial in Romania. Critics say the project, which will be the tallest and largest Orthodox church in the world when finished, is a waste of public funds.

Although the post on Google Maps was removed within hours, it was screenshotted and posted on social media.

CNCD argued that Google Romania failed “to take quick measures against the edit” and did not inform the tech giant’s European office in Ireland. As well as the fine, the sanction requires Google Romania to publish the council’s decision on its homepage for 10 days.

In a statement, Google Romania defended its use of user-generated content, arguing that it wanted Google Maps “to reflect the real world”. It added that the post in question was fixed promptly and that it would “continue to vet and eliminate unwanted content.”

The CNCD decision was welcomed by Vasile Bănescu, a spokesperson from the Romanian Orthodox Church, who told Euronews: “I thank all those who took a stand against an intolerable abuse, an offence against the church.”

But others felt that the furore over the post reflected the fact that even those behind the project are conscious that it is a waste of public funds – and a massively delayed one at that.

“You usually get that mad on an act of satire when that turns out to be true and you feel exposed,” said Dan Alexe, a Romanian filmmaker.

The People’s Salvation Cathedral was contentious even before construction began in 2010. Eight years later, it is still missing its finished dome, while both the interior and exterior of the building is unfinished.

“I believe that a country should spend taxpayers’ money wisely and efficiently,” said Vlad Alexandrescu, a former culture minister.

“A country such as Romania, gravely lacking investments in crucial sectors such as education, health, infrastructure and culture can’t afford to spend this much on any church or any kind of monument.”

Meanwhile, Radu Umbreş, a Romanian anthropologist, believes the controversy is due to the fact that vast amounts of public funds are being poured into financing a place of worship in a secular state.

“Romanian society is divided between those who regard the project as legitimate and a symbol of pride, and those who look at it as a waste of public money, unnecessary grandiose and showing bad taste,” he said.

But others welcome the project as a symbol of faith in the country where 20 million people are Orthodox Christian and the church retains considerable influence over social and political life.