Greece’s prime minister says a potential move by Turkey to allow the reopening of an Orthodox seminary on an island off Istanbul would help bring ordinary Greeks and Turks closer. 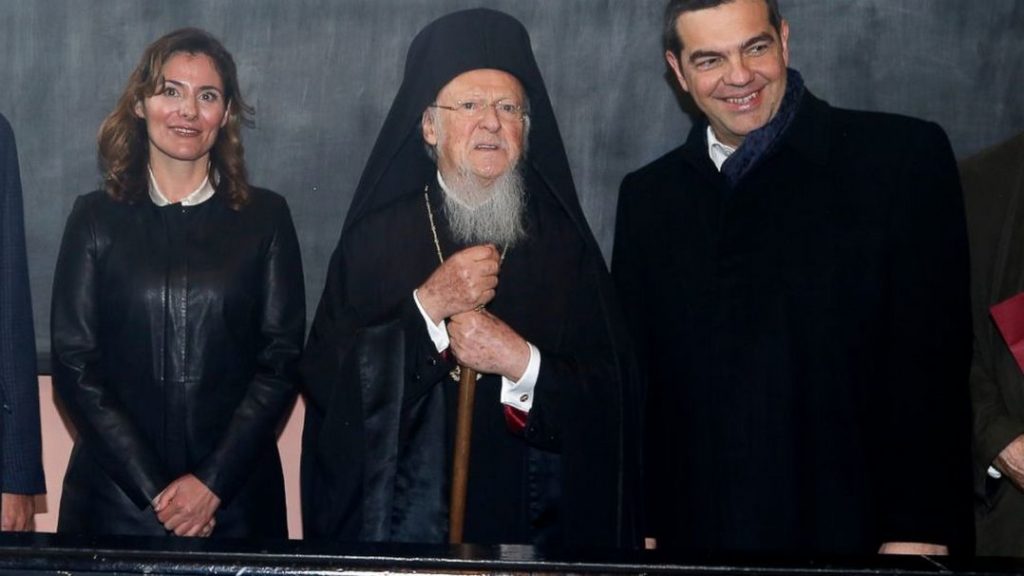 (The Associated Press) Greece’s Prime Minister Alexis Tsipras, right, his partner Betty Baziana, left, and Ecumenical Patriarch Bartholomew I pose for the photographers during their visit at the Theological School of Halki, in Heybeli Island, near Istanbul, Wednesday, Feb. 6, 2019. The president of Turkey and the prime minister of Greece agreed Tuesday on the need to keep “channels of dialogue” open between their countries, which have come to the brink of war three times since the early 1970s and remain divided over an array of issues. (AP Photo/Emrah Gurel)

By EMRAH GUREL Associated Press
ISTANBUL — Feb 6, 2019 — A potential move by Turkey to allow the reopening of a Greek Orthodox theology school on the island of Halki, off Istanbul, would help bring the two countries closer together, Greece‘s prime minister said Wednesday.

During a visit to the site, Alexis Tsipras voiced hope that the seminary at Heybeli Island —known as Halki in Greek — can resume teaching after nearly half a century.

“I want to believe we are near the day when . these halls will once again ring with the happy laughter of students,” Tsipras said at the school where he also met with Ecumenical Patriarch Bartholomew I, the spiritual leader of the world’s Orthodox Christians who was educated at the Halki school.

Tsipras, who is ending a two-day visit to Turkey, became the first serving Greek prime minister to visit the seminary. The visit coincided with the day the seminary celebrates Patriarch Photios, who founded the school in 1844.

“Unfortunately, in the past 48 years, we have been celebrating this day without our professors and without the students,” said Bartholomew, who has long pushed for its reopening.

He expressed hope that the day the school would reopen “will not be far.”

Turkish President Recep Tayyip Erdogan has said Turkey is prepared to reopen the seminary if Greece takes steps to improve rights of Greece’s Muslim minority, including allowing them to elect their own religious leaders.

Bartholomew’s Patriarchate is based in Istanbul — former Constantinople — which was the capital of the Byzantine Empire until its conquest by Muslim Ottoman Turks in 1453.

Earlier on Wednesday, Tsipras visited Istanbul’s Byzantine-era Hagia Sophia church, which was converted into a mosque after the conquest and now serves as a museum.