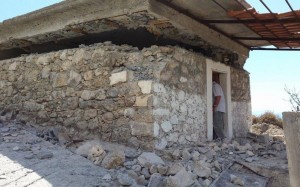 Greece has condemned the demolition on Wednesday of an orthodox church in the village of Dhermi, on the southwest coast of Albania.

“The destruction of holy sites and objects of worship took place, at least until recently, in the wider region of the Middle East and North Africa, at the hands of jihadists. Today we also saw such an act carried out in our neighboring country, Albania,” Foreign Ministry spokesman Constantinos Koutras told journalists in Athens Wednesday.

“No one is more ungrateful than a beneficiary,” he said.

Athens was expected to lodge an official complaint with Albanian authorities and the international community.

On Monday, Greece’s Foreign Ministry called on Tirana to respect religious freedoms after local authorities had partially destroyed the interior of the Holy Church of Aghios Athanasios.

Albanian officials have said they intend to carry out excavations at the site in an attempt to discover the grave of Nilo Catalano, a Catholic missionary from the 17th Century.