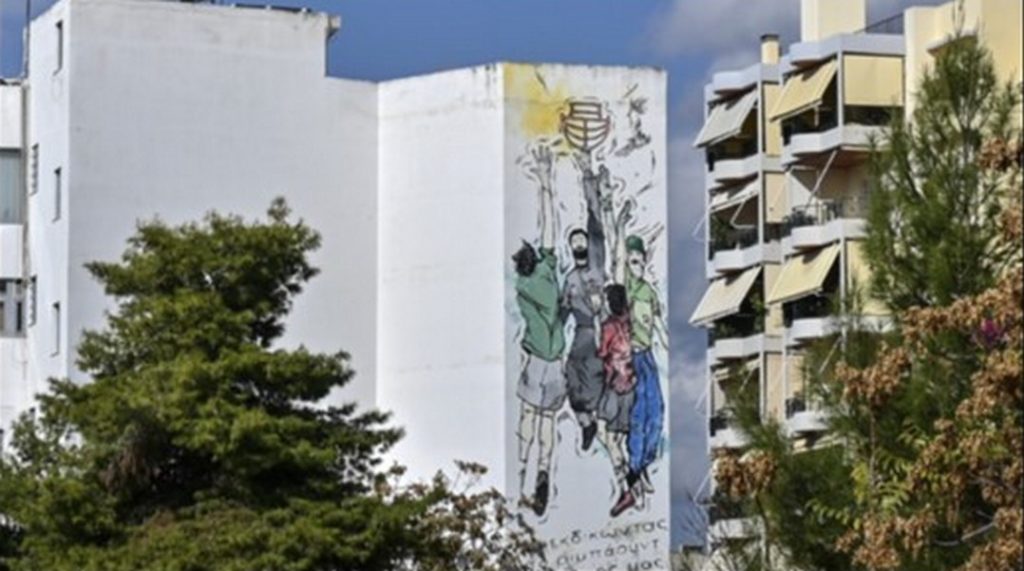 A graffiti depicting a priest playing basketball with children reads “Claimning the rebound of our life” on the facade of the “Ark of the World” charity headquarters in Athens, on November 21, 2022. (AFP)

Greece has opened a probe into one of the country’s best-known child charities after numerous claims of alleged abuse and financial mismanagement, a justice ministry source told AFP on Sunday.

The Ark of the World, founded by a charismatic priest, has worked with underprivileged children for at least two decades in Athens and several other parts of Greece.

Since mid-November, Greek media have been broadcasting allegations of malfeasance at the charity from former staff and former children under its care, their faces obscured and voices disguised.

One 19-year-old told police that he was allegedly sexually molested by a senior charity official, according to media reports.

One former staffer said that he was fired after speaking out after a co-worker allegedly beat three boys.

Others have claimed that charity executives demanded monetary donations instead of clothes and food, and lived lives of luxury.

The government this week replaced the organization’s entire board and installed new management.

The charity had been claiming to have some 500 children in its care, but deputy social affairs minister Domna Michailidou on Sunday told To Vima daily that the actual number was 136.

“We are interested in seeing what happened as regards to the finances. Because these are facilities handled large sums of money, primarily from private donations,” Mitsotakis said.

The non-profit had received millions of euros and dozens of properties from private donors over more than two decades, according to media.

The charity’s founder, Father Antonios Papanikolaou, who has worked with children from underprivileged Greek and migrant families since 1998, has dismissed the claims.

“It’s not possible. This cannot have happened. I never harmed a child,” he was quoted as saying by Star TV Wednesday.

The head of the Orthodox Church of Greece, Archbishop Ieronymos, sought to distance the church from the priest, saying Papanikolaou was “solely responsible” for running the charity and that he “never consented” to cooperate with church welfare officials.

In 2018, the Ark of the World was among 50 individuals and organizations from 26 EU countries to receive the annual European Citizen’s Prize, an award for initiatives that promote integration and tolerance.

The Ark had also received numerous domestic awards, including from the Athens Academy in 2008.