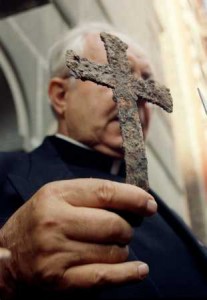 NEW YORK – It is with deep sorrow that the Greek Orthodox Archdiocese announces the passing of Rev. Father John Romas on Sunday January 24, 2016. Father John fell asleep in the Lord shortly after being diagnosed with pancreatic cancer and reposed peacefully at White Plains Hospital, N.Y.

Father John Romas (Ἰωάννης Ραμπαούνης) was born on April 10, 1929, to Demetrios and Vasiliki Rambaounis (Ραμπαούνη) in Dorvitsa, Nafpactias, Greece.  Upon completion of his high school education, he went on to complete a four-year program at the Hephaestus School of Mechanics, in Athens, Greece. He arrived in the United States on August 29, 1952, and later that year married Lorraine (Ourania) Papachristou in Mt. Vernon, N.Y.

Father John followed his calling later on in life and in August of 1984 was ordained a deacon and presbyter in Greece.  Following his return to the United States in 1987, His Eminence Archbishop Iakovos assigned him as the Proistamenos of the St. Nicholas Greek Orthodox Church in downtown Manhattan.  Father John continued to serve the St. Nicholas Church until the devastating terrorist attack of September 11, and the destruction of the church.   A priest for almost 32 years, Father John served with zeal and dedication, and indeed was the heart and soul of the St. Nicholas Church, especially after its destruction.  He labored tirelessly for the rebuilding of the church and anxiously awaited the completion of his beloved St. Nicholas, taking much pride in its designation as a National Shrine of our Archdiocese.

A compassionate and kind man with a gentle soul, Father truly loved his Church, his parishioners, and his beloved Presvytera of 64 years who survives him. May the Good Lord grant him rest in His heavenly kingdom and give comfort and strength to his loved ones. May his memory be eternal!

The funeral service will be held at the Greek Orthodox Cathedral of Sts. Constantine and Helen, Brooklyn, NY, where he assisted following 9/11.

The schedule of services will be as follows:

In lieu of flowers, the family requests that donations be made in memory of Father John to the St. Nicholas Rebuilding Fund or for the St. Nicholas kouvouklion used for the Good Friday Epitaphios.