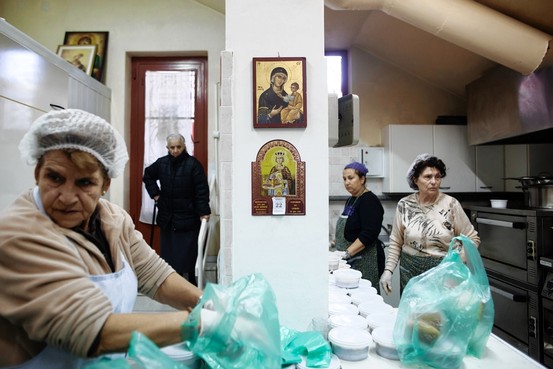 Alkis Konstantinidis for The Wall Street Journal
Women in the Athens suburb of Argyroupolis prepare meals at a church soup kitchen in late November, as church resources are strained by crisis.

ATHENS—In the basement of St. Varvaras church, Rev. Theodoros Georgiou issued instructions on a recent morning to volunteers preparing hundreds of packages of food for local families, as two phones on his desk buzzed with more calls about supplies for Greece’s growing ranks of the needy.

“We do not solve the problems here,” Father Theodoros said. “We put out fires.”

As unemployment has mounted in recession-hit Greece, so have poverty and hunger in Father Theodoros’s once firmly middle-class parish in the Greek capital. His congregation’s philanthropic resources have been stretched to the limit, he says, as it contributes to churchwide efforts to feed 10,000 people a day across Athens—which in turn is part of what Greek Orthodox Church officials say is the biggest mobilization to help the disadvantaged here since the aftermath of World War II.

Critics complain that the church isn’t doing enough, however. In a country where the state is nearly bankrupt and its political forces are splintered, the church remains a powerful and unifying institution—one that these people say must reassess its contribution not only to the nation’s spiritual needs, but also to its worldly salvation.

“Greek people expect their church to go out of its way to help Greek society endure and recover,” said Aristides Hatzis, an associate professor of law, economic and legal theory at the University of Athens. “This is a national emergency.”

Many critics have focused on the church’s extensive holdings of real-estate, as well as in blue-chip companies and government bonds, saying the church can help the country financially.

“The church’s contribution is limited to the operation of soup kitchens and the distribution of food it has received from donations. This is all just a drop in the ocean,” said Grigoris Psarianos, a lawmaker with the small Democratic Left party, part of Greece’s coalition government.

The church says it is doing the best it can, not only feeding thousands of the hungry, but also helping to deliver health care services and medicines. “What we can do is try to make sure people have the basic necessities, so that we have a decent human society,” said Rev. Vasilios Havatzas, head of the Athens archdiocese’s general charity fund. “The church just couldn’t sit and watch as the crisis erupted.”

Critics, including Mr. Psarianos, want the church to pay more taxes and to assume responsibility for paying its clergy, something that is now done by the government.

Back in 1952, as Greece was struggling to recover from World War II and its own brutal civil war, church and state struck a deal: The church would hand a portion of its real-estate to the state and in exchange, the government would pay clerics’ salaries.

The church’s annual payroll has swelled to about €200 million ($262 million) for its 9,000 staff, church officials say. As Athens needs to slash costs to pare its mountainous debt, demands are mounting for the church to pay its own way. Religious leaders say they are open to that, if they can boost church revenue.

One obvious source of increased funds: Better management of the church’s sprawling property empire. The exact value of the church’s holdings isn’t known. But it is the country’s second-largest land owner after the government, which has an estimated €300 billion property portfolio.

Church leaders have asked the country’s privatization agency for advice on how to boost income from real estate, but it could take several years to implement its suggestions.

More income from church property holdings should also mean more tax revenue for the Greek government. Under a law passed in 2010, Greece raised the amount of taxes the church must pay on its earnings from commercial properties.

For example, the church owns prime beach-front land near Athens that, if developed, would create jobs and raise tax revenue. Critics say the church is holding out for more favorable development terms and improved market conditions. The church says its investment plans are tied up in red tape but declined to offer additional details.

There are limits to how far mainstream politicians are willing to push the church, a guardian of national identity, language and religion for centuries in a country where some 95% of people say they are Orthodox. Religious icons adorn public schools, courts and even tax offices.

Many politicians have traditionally sought to highlight their ties to church leaders, who often weigh in on sensitive national economic and political issues, and are loath to challenge them, fearing a backlash from their churchgoing constituents.

But that may be changing, as the church’s reputation has been dented by scandals involving financial sins. Among the best known was a land-swap with the Greek government engineered by a thousand-year-old monastery that cost taxpayers tens of millions of euros and contributed to the downfall of Prime Minister Costas Karamanlis in 2009.

The head monk of the monastery, one of the country’s richest and most powerful, was accused of deceiving government officials in 2005 into exchanging cheap farmland—including lakes—for prime Athens real estate. He has denied a public prosecutor’s charges that he incited officials to commit fraud, perjury and money laundering. The matter has yet to be heard.

Lawmakers have investigated several former government ministers over the deal but the probe was dropped after it fell outside a statute of limitations that applies to those who have held government office.

More recently, press reports of bishops having stashed millions of euros in bank accounts at home and abroad have been multiplying. The church and police are investigating.

The church says it is determined to pay the taxes required under the law. It says it paid €12.6 million in taxes in 2011, and that its books are audited just like other taxpayers’.

Church officials also say they are struggling to do more with less. The costs of delivering food, clothing and health care to the needy are rising as church revenue falls.

Not only are recession-hit worshipers putting less in the collection box on Sundays, the church’s 1.5% holding in the country’s largest lender, National Bank of Greece, ETE.AT +1.41% hasn’t paid any dividends since 2008—depriving the church of some €5 million a year that used to help fund church activities. Rental income from its property portfolio has dropped to below €2 million annually from about €4 million in 2007, the church says.

On the front lines, the clergy is also hurting from the crisis, alongside the faithful.

In a parish near Father Theodoros’s in Athens, Rev. Nikolaos Koutroumanis, who is 45 and supports his wife and 14-year-old daughter, has seen his salary fall by 30% in the last two years amid cuts to public-sector salaries. He says he hasn’t gone shopping for clothes, nor has his wife, in the last two years.

“I have trust in God and that he will prevent the worst,” said the bearded priest, dressed in a long black robe. “What I fear is that at the same time, I won’t be able to pay my bills and taxes.”

A version of this article appeared December 27, 2012, on page A9 in the U.S. edition of The Wall Street Journal, with the headline: Greek Church Fields Calls to Do More.