[ditty_news_ticker id="27897"] Greek Festival: An Opportunity for Mission and Outreach! 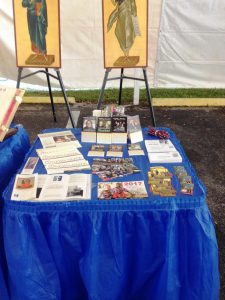 “Ministry” is from the Greek word diakoneo, meaning “to serve”.  Our Pastors spend their lives in ministry but are not the only ones called into the Lord’s service.  We as the Laity also have a responsibility to obey the Lord’s commands and follow His examples to bring others to Him.  Our priests, Fr. Mark and Fr. Steven, appealed to parishioners to join them in a formalized Outreach Ministry Committee to explore ways to increase the witness of our Faith.

A small group of us took up the challenge. We held our first meeting just one week prior to our annual Greek Festival 2017. Two big questions arose: “Are we as Orthodox Christian believers equipped to spread the Word?” We at St. Mark in Boca Raton replied with a resounding “YES”. And, “What is the thing we want to be known for as Orthodox Christians?” We wanted to change the outside perception in our community of being “the church with the Greek festival”.  It was decided that our annual Greek Festival offers us a great opportunity to do this and to shine a light upon our Orthodox Christian faith. We left the meeting with the decision to sponsor an Outreach Booth at the upcoming Greek Festival. This would be in addition to our already established Church Tours, lectures by our Clergy, and a Saturday evening Vespers service during the Festival.

Here is how we got started: We had to determine where the Outreach Booth might reach the most people.  Why not in the Vendor Area, a popular place for festival-goers?  What materials should we place on our tables in order to entice passers-by to stop and look? A list of books and materials which we found attracted us and educated us to Eastern Orthodox Christianity, was created. Our bookstore was scoured for books, more were ordered, and various pamphlets, brochures, and other handout materials that are kept at the Church regarding our Orthodox Christian ministries were gathered. An important next step was to create a schedule of volunteer workers to ‘man’ the booth.  It was necessary to find workers who would be comfortable and knowledgeable to share their love of Jesus Christ with others, and the basics of Orthodox Christianity.

Here is how we set up:

The attention of passersby was captured with an attractively organized table which held a display of materials which included newsletters, pamphlets and “give-aways” like pens, refrigerator magnets, and bookmarks from OCMC, IOCC, and Orthodox Prison Ministry to name a few; and there were introductory books, pamphlets, and handouts on Eastern Orthodox Christianity.  The Gospel, a censor and a cross were placed on the table.  Four large Icons provided a background.  Although we did not have an audio/visual display, we would recommend having information available in that format.

A large banner and posters to advertise our church tours was hung on the front of the display table. Business cards about our Introduction to Orthodoxy Class were handed out.  Forms for visitors and new inquirers that are used at St. Mark were placed on the table for those who were seeking more information. The Church Tours and Lectures were promoted by booth workers as well as by all our Festival booth volunteers. Minimal fees were charged for books, or we asked for a small donation, or gave them away to serious inquirers.

Here is what we learned:

There was an overwhelming positive response by visitors/inquirers to our beautiful Sanctuary, the Lectures and our Outreach Booth.  Two things in particular are noteworthy for success: friendliness (i.e. a welcoming attitude), and the availability of priests (retired also), to answer inquirers’ theological questions which were many. We noted that there are many lapsed Orthodox within our community who need encouragement to come back to the Church.

Here are some of our results in just a few short months:

A small number of inquirers from the Festival are attending the Introduction to Orthodoxy Class.  Our Church community was very positive, supportive and encouraging of this endeavor. It is still too soon to know what the far reaching effects of this Outreach might produce.

We are striving to be a recognizable voice in the community. May we be a catalyst for other Orthodox Churches to replicate this Ministry.  Why not adapt and customize this outreach in your community at festival time?  Let’s keep in touch and compare results.