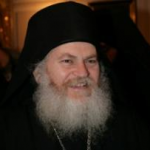 The Greek courts have ruled that a respected Orthodox Christian monk will be imprisoned over Christmas over a land dispute in northern Greece. Abbot Ephraim who leads the largest monastic order in the Orthodox Christian world, has strong links to the royal family in the United Kingdom, among others, and his supporters have threatened the Greek government with widespread protests to release the Abbot.

Speaking to the London Daily News Bishop Athanasius of Limassol in Cyprus said:

“The abbot has not been imprisoned yet and is now on his way to Athens, we hope the Greek legal system considers the implications of imprisoning Abbot Ephraim at Christmas”.

The dispute which could lead to the imprisonment of Abbot Ephraim was a result of a decision taken by the Athens Appeals Council, following a dispute between investigator Irini Kalou who pressed for him to be imprisoned, while defence attorney Panayiotis Matzounis argued the cleric should be released on €200,000 bail, while being barred from leaving the country and reporting to a police station twice a month.

Abbot Ephraim has been widely acclaimed as one of the most renowned personalities in Orthodoxy globally and despite a “concerted smear campaign” according to sources in Mount Athos, the Abbot recently returned from Russia having met the Russian President Vladimir Putin and Prime Minister Medvedev.

The Association of the friends of Vatopaidi Monastery issued the following statement:

“Any serious-minded person, particularly anyone who is dealing with ecclesiastical issues, is well aware that such persecutions have identical motives with the ones used against righteous people throughout the centuries.

Others, who have truly hurt the Greek society and have been shown as having acted in their own interests in actual scandals with obvious bribery, are not bothered by anyone.

On the contrary, indigent monks who sacrifice even their own lives for the benefit of their fellows are presented as criminals! Does this remind us of something?

In the archives of the Vatopaidi monastery, entire volumes containing legal opinions given by the best Greek lawyers regarding the ownership of Lake Vistonida are kept. Books have been presented, even recently, in front of numerous highly knowledgeable individuals.”

The Greek news channel Sky in a recent documentary and investigation into the alleged land fraud at Porto Lagos Metohi showed that there has been “no loss” to the Greek taxpayer and actually there has been no fraud.