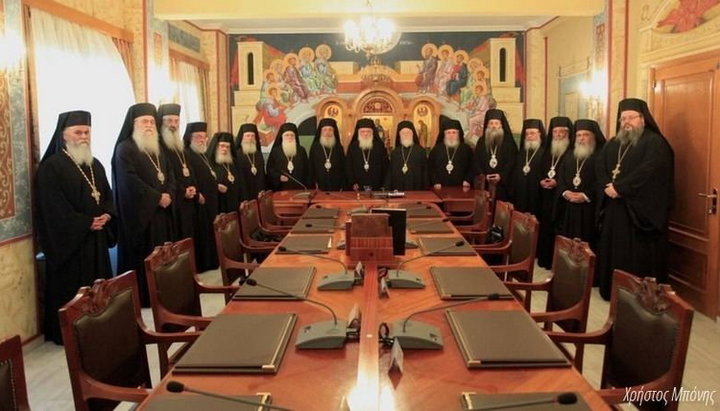 Hierarchs of the Synod of Bishops of Greece

[Athens] As they have already done several times, the hierarchs of the Greek Church have again postponed discussion of the Ukrainian ecclesiastical issue, according to sources within the Greek Orthodox Church.

Yesterday, the Telegram channel of the Moscow Patriarchal press service, “Church Today,” reported, citing its own sources within the Greek Church, that the hierarchs would not discuss Ukraine at the upcoming session of the Bishops’ Council, which will open on October 8.

This report comes after the Permanent Holy Synod of the Greek Church met in Athens on October 1, and, according to Greek sources, was “seeking a formula whereby the Church of Greece takes a position regarding the Ukrainian Church’s autocephaly.”

An extraordinary session of the Bishops’ Council of the Greek Church could be called in February of next year. “In the meantime, judging by everything, the line remains as before—to not react to what is happening and postpone,” the source explained.

The Greek Church is unfortunately divided on the Ukrainian issue, with several hierarchs strongly speaking out against Constantinople’s non-canonical invasion of the Ukrainian Church’s territory, and others openly supporting the invasion and creation of a new church. Some hierarchs have even taken it upon themselves to concelebrate with representatives of the schismatic “Orthodox Church of Ukraine” (OCU) already.

The situation is complicated by the fact that a number of hierarchs who make up the Holy Synod and Bishops’ Council of the Greek Church are in fact hierarchs of the Patriarchate of Constantinople, serving in the areas that became part of Greece after the Church had already received its autocephaly in 1850.

It is likely this division that has caused the bishops to bounce back and forth on the Ukrainian issue. The Holy Synod had already declared in January that it would not make a decision about the OCU but would instead entrust it to the broader Bishops’ Council, consisting of all of the hierarchs of the Greek Church.

However, despite this decision, the Holy Synod again considered the issue at its August session, hearing reports from the two commissions it had created in March to investigate the Ukrainian issue in depth. Reports vary on whether the commissions recommend recognizing the OCU or not, though the Holy Synod did make a statement concerning the Patriarchate of Constantinople’s right to grant autocephaly, though it worded its statement vaguely enough so as not to refer directly to autocephaly for Ukraine.

The Synod also announced that it was entrusting the issue to the Greek primate, His Beatitude Archbishop Ieronymos of Athens and All Greece, who in turn declared that he could not shoulder the issue alone but would turn it over to the Bishops’ Council, though it now seems that course of action will again be delayed.

Share. Twitter Facebook Pinterest LinkedIn Tumblr Email
Previous ArticleSERBIAN HIERARCHS: ALL AUTOCEPHALOUS CHURCHES ARE EQUAL, REGARDLESS OF ETHNICITY
Next Article ARCHDIOCESE OF WESTERN EUROPE TO ELECT TWO VICAR BISHOPS AFTER BEING BLOCKED BY CONSTANTINOPLE FOR MANY YEARS