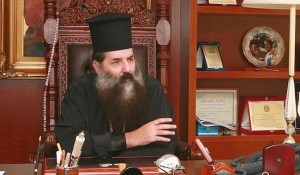 “Adoption of the new law is officially opening the page of state persecutions against our faith. The politicians shamelessly refer to the European consensus concerning legalization of sodomy, but they conceal the fact that the post-Christian Europe has become Sodom and Gomorrah,” Metropolitan Seraphim of Piraeus is speaking of what is going on in Greece.

Now that the so-called Anti-Racism Law which prohibits “discrimination” against homosexuals is adopted in Greece, it is time for the next step: to secure the legal status of “same-sex unions”.

Metropolitan Ignatios of Larisa and Tyrnavos:

“Sin is being officially legalized in our country… Homosexuality is an abominable sin which leads people to inevitable spiritual death… The politicians are following the stench coming from the “civilized” countries which before us recognized that black is white, that bitter is sweet, and that unlawful is lawful…

Thus, “Let us attend”. “Let us lift up our hearts”. This is Orthodox Greece. This is our treasure. They envy us and intend to take this treasure from us. Let us not fall into this trap! Let us not be traitors!”

Metropolitan Pavlos of Sisanion and Siatista:

“Perhaps it is time to close our doors before those ‘politicians’ who visit us allegedly for respect, but in reality for populist purposes?

“Does someone sincerely believe that the Church can betray its eternal values and adapt itself to the momentary needs of each historical epoch?

“The undeniable right of the Church is to bear witness to the truth. And homosexuality is inconsistent with Church life.

“Gentlemen of the government! Perhaps tomorrow you are going to demand that the Church accepts bestiality and pedophilia? Some expect that as soon as ‘the Free Cohabitation Law’ is adopted, you will be forced to legalize pedophilia.

“Europe will put pressure upon you. And you are ready to do anything. Do you really think that we will ever agree with this?”

“Adoption of the new law is officially opening the page of state persecutions against our faith. The politicians shamelessly refer to the European consensus concerning legalization of sodomy, but they conceal the fact that post-Christian Europe has become Sodom and Gomorrah. The persecutions are approaching. We will be threatened, we will be reviled, we will probably be imprisoned and murdered. But we must remain faithful even unto death.We ought to obey God rather than men (Acts 5:29), remembering that In the world ye shall have tribulation (Jn 16:33), because the world hateth you, for the Lord has chosen you out of the world (Jn 15:18-19). And we should not forget the words: And fear not them which kill the body, but are not able to kill the soul (Mt 10:28).

“On behalf of the Holy Metropolis of Piraeus we officially announce to all the politicians who will vote for legalization of the moral insanity, that all contact with them will be stopped.”