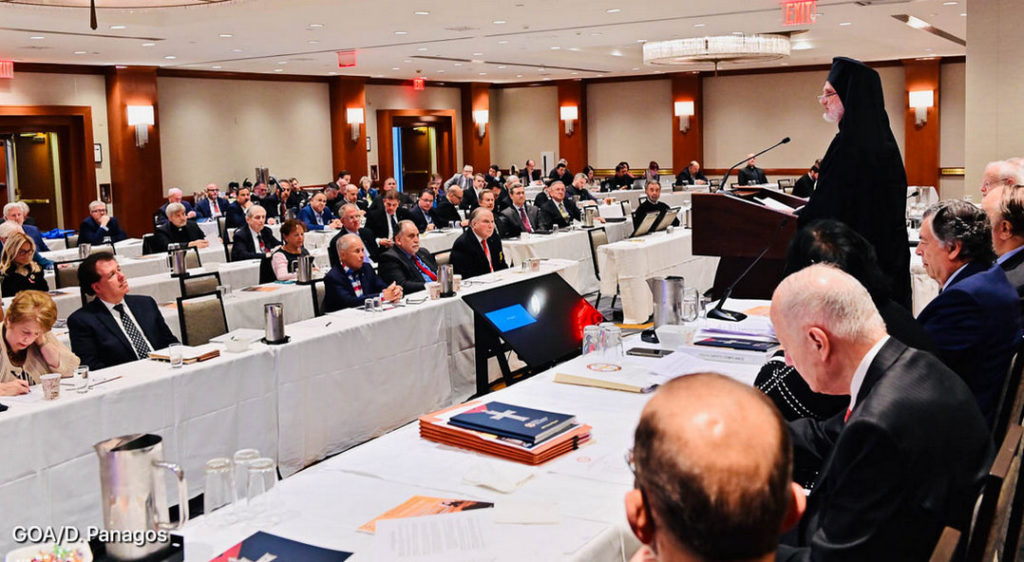 NEW YORK – At the October 17, 2019 Archdiocesan Council, Executive, and Finance Committee meetings, the Archdiocesan budget for 2020 was approved (2020 Adopted Budget) .

His Eminence Archbishop Elpidophoros expressed his appreciation for the work done by all to accomplish this important task.  “I am grateful to our people for all the effort put into crafting this budget.  It provides for notable changes in the current needs of our Archdiocese while still being a balanced budget.  I am especially grateful for the support extended by our Synod, Executive Committee and full Archdiocesan Council for Hellenic College Holy Cross.”

The 2020 Total Commitment from parishes was increased 3% as needed to balance the current budget and as allowed by the 2018 Clergy Laity Congress; the first increase in 3 years.  The 2016 Congress previously approved an increase of 7.74% for 2018.  That increase was eliminated in October 2017, saving parishes over $1.6 million in Total Commitment payments to the Archdiocese.  In October 2017 the Archdiocese pledged to balance the budget and meet all financial commitments without increasing the Total Commitment allocations paid by parishes.  That pledge was met through careful cash, budget and expense controls established at the Archdiocese.  Implementing those controls resulted in an operating excess of revenues over expenses in both 2018 and for the six months ended June 30, 2019 and continue to guide the budgeting process just completed for the 2020 budget year.

Other notable changes to the budget include increased support for the Ecumenical Patriarchate to a new total of $1.5 million – restoring a portion of the prior budget reduction.  The Hellenic College/Holy Cross support was increased to $2.5 million – the largest in history and with the understanding that it may require a further increase during 2020 to meet immediate cash needs of the School.

The Archdiocesan Council and Executive Committee also passed resolutions allowing a grant of up to $3.5 million per year for up to five years to Hellenic College/Holy Cross beginning with the School’s 2020/2021 fiscal year to clearly exhibit the Archdiocese’s long-term commitment to the School. Although, long-term borrowings on a line of credit should not be necessary, the Archdiocesan Council, together with the Executive Committee and Finance Committee, also supported increasing the Archdiocese’s line of credit from $3 million to $5 million as an explicit demonstration of its ability to meet its obligations on a timely basis.

In passing the budget, the Archdiocese also maintained the directive of the 2018 Congress by including an additional $1 million contribution to the pension plan in the 2020 budget. Other budget changes include increases for Internet Ministries and the Information Technology portions of the budget. Some departments experienced reductions in their budgets in order to maintain the balanced budget.

Importantly, the provided statements confirmed that the budget had been met and only unrestricted funds were used to cover operating needs. In addition, the statements disclosed that $2 million borrowed on the line of credit was fully repaid at June 30, 2019 demonstrating the current solid financial footing of the Archdiocese. Recent changes to the Archdiocese’s Regulations require preparing and distributing interim financial statements on a regular basis. (see financial statements)

In closing, His Eminence Archbishop Elpidophoros stated “None of our progress is possible without the continued support of our parishes through their timely payments of Total Commitment allocations. The Officers and I express deep appreciation to our parishes for their ongoing support. In addition, we are committed to finding additional revenue sources beyond the Total Commitment program to fund the important needs of our Archdiocese.”