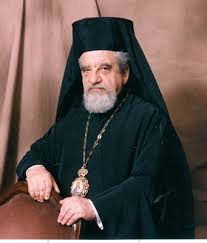 NEW YORK – The Greek Orthodox Archdiocese of America announces the elevation of Bishop Philotheos of Meloa to the rank of Metropolitan of Meloa, according to an official announcement of July 9, from the Ecumenical Patriarchate.

His Eminence Metropolitan Philotheos came to the United States in 1960, as a deacon, on the invitation of Archbishop Iakovos and was ordained a priest in 1961. He was assigned to the Greek Orthodox Church of the Annunciation in Scranton. Pa., where he served until 1965. He was then transferred to the Greek Orthodox Church of St. Eleftherios in Manhattan. He was elected to the episcopacy on April 29, 1971 by the Holy and Sacred Synod of the Ecumenical Patriarchate, and ordained bishop on June 6, 1971 by Archbishop Iakovos, in the Archdiocesan Cathedral of the Holy Trinity in Manhattan. He served faithfully the Greek Orthodox Archdiocese of America for almost 55 years, and continues serving in spite of his retirement in 1997.