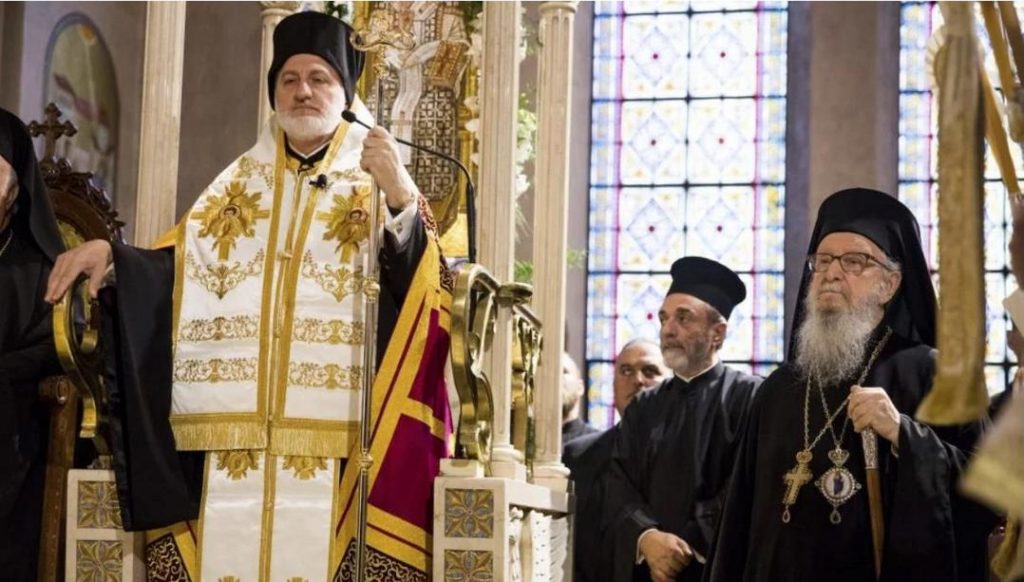 NEW YORK (AP) — The Greek Orthodox church of the United States, a far-flung denomination of 1.5-million members, on Saturday installed its first new leader in 20 years — a lifelong European whose top priority is completing construction of a shrine in New York City linked to the Sept. 11 attacks.

Elpidophoros Lambriniadis, 51, a native of Istanbul and a longtime theology professor in Greece, was enthroned as archbishop in an elaborate ceremony at the Cathedral of the Holy Trinity in Manhattan. Many Greek Americans from across the U.S. came to New York for the event.

Elpidophoros was unanimously elected by senior Greek Orthodox officials last month to succeed Archbishop Demetrios, who recently retired at age 91 after serving in the post since 1999.

Much of Demetrios’ tenure as archbishop was complicated by controversy related to construction of the St. Nicholas National Shrine next to the World Trade Center memorial plaza in lower Manhattan. The new church is intended to replace a tiny Greek Orthodox church obliterated in the attacks of Sept. 11, 2001.

Construction of the shrine was suspended in December 2017 amid rising costs and questions over how donations were managed. Some funds earmarked by donors for the shrine were shifted to unrelated projects as the archdiocese struggled with what it called a “severe and complex” financial deficit.

In October, the archdiocese’s governing council declared that the denomination had restored financial stability. It said that an investigative committee determined there was no fraud or misappropriation of money involved in the financial mismanagement that led to disruption of the St. Nicholas project.

The investigative committee indicated that more than $30 million would still need to be raised to complete the project, which now has an estimated total cost of nearly $80 million. Archbishop Elpidophoros told The Associated Press that one of his first actions, after the weekend’s enthronement ceremonies, would be to convene a fundraising meeting.

“For me and the whole archdiocese, it is the first priority,” he said. “It’s a matter of pride and dignity to finish this church as soon as possible.”

Referring to the memorial plaza at ground zero, he added, “We know how sacred this place is for the American people. We have to respect that.”

Elpidophoros studied as an undergraduate at Aristotle University’s theological school in Thessaloniki, Greece, and later earned his doctorate there before joining its faculty. He also has studied at University of Bonn in Germany and the Theological School of St. John the Damascene in Beirut, Lebanon, as well as teaching for a semester in 2004 at the Holy Cross Greek Orthodox School of Theology in Boston.

He said that stint in Boston was his only lengthy stay in the United States, though he has briefly visited many other places, including California and Florida.

From its national headquarters in New York, the archdiocese oversees 540 parishes across the U.S. staffed by about 800 priests.

“It will be a challenge for me to get to know all of the different places,” the archbishop said. “I have to travel to all our parishes. … Already my schedule is full for next three months.”

Also high on the archbishop’s agenda are concerns among many of the church’s priests about the stability of their health care and pension plans. Priests raised the issue in a teleconference with Elpidophoros a few days after his election in May.

The archbishop addressed the concerns Thursday in a meeting with clerics in New York.

“I give you my word that together, we will handle the earthly concerns — the health care, financial security, retirement, and all the others that rob you of a good night’s sleep — and we will handle them in a way that is transparent and responsible to you,” he said.