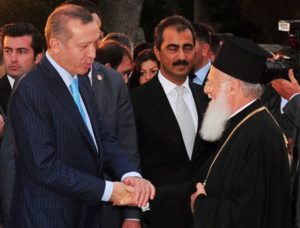 The Orthodox Christian community of Turkey has moved to show its support to the country’s armed forces, which launched a military campaign, “Operation Olive Branch”, against armed Kurdish groups in northwestern Syria on Jan. 20.

Although the vast majority of Turkey’s population is Muslim, the country’s geography and history hold an important place for Christianity. Some of the most important locations for Eastern Orthodox Christians lie in Turkey, including the seat of the Ecumenical Patriarch, Bartholomew I, in Istanbul.

Bartholomew I expressed his support for Turkey’s military operation in a letter to Turkish President Recep Tayyip Erdoğan, according to the news site Greek Reporter.

“We pray that you and the Turkish Armed Forces will achieve success and ‘Operation Olive Branch’ will bring peace to the area as its name promises,” the letter read.

This support was echoed further south, when a Greek Orthodox church in the southern Turkish city of Iskenderun flew a Turkish flag to convey its good wishes for the operation, said the Turkish news site Gerçek Gündem.

Representatives from the Jewish and Armenian communities of Turkey, two of the country’s other historical minority groups, also voiced their support for the campaign, as the pro-government Daily Sabah reported on Jan. 24.