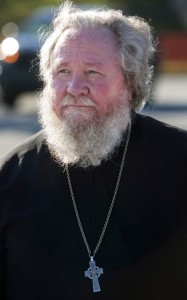 Ashley L. Conti | BDN
The Rev. Leo Schefe, the new pastor at St. George Greek Orthodox Church in Bangor, poses for a photo on Aug. 27 in Bangor. Schefe replaced Adam Metropoulos, who is serving a 6 1/2 year sentence for sexually assaulting an altar server.

BANGOR, Maine — The Rev. Leo Schefe, the new pastor at St. George Greek Orthodox Church, has something in common with one-third of his congregation — he’s a convert to Orthodox Christianity.

Schefe, a native of Chicago, was an evangelical Protestant working in the 1990s at a hospital in Portland, Oregon, in the Internet Technology department when he joined the Greek Orthodox Church. He quickly felt called to the priesthood and moved to Greece for five years to study and become familiar with the language.

Since then, Schefe, 58, has served Greek Orthodox churches in Anchorage, Alaska, and Keene, New Hampshire, and worked as a missionary in New Zealand.

“He’s a great fit for us because he is a glass-full person,” Lee Speronis, president of the St. George Parish Council, said recently as he, the priest and other congregants set up the church’s food booth at the American Folk Festival on the Bangor Waterfront. “He’s a positive person, and that is exactly what we need right now because we went through a hard time.”

That difficult time culminated earlier this year with the trial and conviction of the church’s former priest, Adam Metropoulos, 53, of Bangor, on charges of sexually assaulting an altar server in 2006 and 2007 when the boy was 15. Metropoulos, who is incarcerated at the Maine Correctional Center in Windham, was sentenced to 12 years in prison with all but 6 ½ years suspended, according to a previously published report.

The congregation was well on its way to healing from Metropoulos’ arrest last year and his removal from ministry when Schefe arrived in May at St. George, the new priest said.

“There are still individuals who are hurting, and the congregation itself still is to a certain extent,” Schefe said. “The metropolis [bishop]in Boston sent a lot of resources this way and paid a lot of attention to this church. I think it was effectual.”

The congregants of the church, founded in the 1920s by Greek immigrants and located on Sanford Street in Bangor, do more than just attend Sunday services.

“We have a higher level of participation here than any other church I’ve ever been to,” Schefe said. “People step up to the plate, and they get it done.”

In addition to converts, the other two-thirds of the congregation is divided evenly between those with Greek roots who grew up in the church and people from other ethnic groups who are Eastern Orthodox Christians. Because St. George’s is the only Orthodox church north of Lewiston, it is attended by worshippers from Cyprus, Bulgaria, Serbia, Russia, Greece, Poland, Romania,Albania, Slovakia and other nations.

Schefe said it is the apostolic authority that runs back through the early church to Jesus Christ and the apostles that first attracted him to the Orthodox church. The priest also said that in Orthodoxy, he found more freedom to express himself in church.