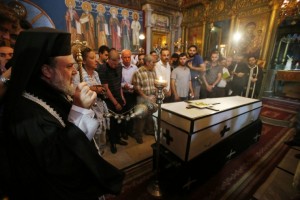 People gather around a casket holding the body of Palestinian Christian woman Jalila Faraj Ayyad, whom medics said was killed in an Israeli air strike, during her funeral at the Saint Porfirios church in Gaza City July 27, 2014. Palestinian medics said at least 10 people had died in the wave of subsequent strikes that swept Gaza, including a Christian woman, Ayyad, whose house in Gaza City was struck by an Israeli bomb. Fighting subsided in Gaza on Sunday after Hamas Islamist militants said they backed a 24-hour humanitarian truce, but there was no sign of any comprehensive deal to end their conflict with Israel.Photo: REUTERS / Suhaib Salem

The Greek Orthodox Christian Patriarchate in east Jerusalem has slammed an Israeli law recognizing Aramaic Christians as a nationality, describing it as an attempt to divide the Palestinian minority.

The Greek Orthodox Church said in a statement that the law, which separates Christians from Arabs, would split minorities living in Israel, eventually weakening Palestinians, reported The Jerusalem Post.

“Palestinian Christians are an important part of the Arab and Palestinian nations; we are proud of the Aramaic identity as it reflects history and culture shaped by Arab Muslims and Christians,” the report quoted Christian Orthodox Church spokesperson Father Issa Musleh as saying.

Musleh stated that their roots as Palestinian Christians cannot be erased by anyone or any group as they are “deeply engraved in history.”

The church official was questioning the law passed on September 16, which recognized the majority of Israel’s Christians as Arameans instead of Arabs, creating a separate Christian minority group.

In issuing the order, Saar had said that Aramean was the actual ethnicity of most of the region’s Christians before the conquest by Arab Muslims in the 7th century.

At the same time, Musleh also denounced a draft law to recruit Arab Palestinian Christians to the Israeli Defense Forces.

He said it is part of attempts to promote internal hostility and division among Palestinian Christians, reported International Middle East Media Center.

He noted that the law would also create conflicts between Muslim and Christian Arabs and Palestinians.

In response to this law, Greek Orthodox Patriarch Theophilus III has issued directives to counter attempts to recruit Christians to the Israeli Army, including holding discussions and activities for church-run schools and other institutions, the media center report said.