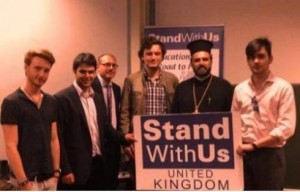 The Greek Orthodox priest, who encourages Arab Christians to participate in military and national service, is a leading and sometime controversial voice in Israeli politics.

He spoke to 40 students on the night, which was held in partnership with The Face of Israel and StandWithUs UK – with an audience of all faiths, from Buddhists to Alawites.

With a growing membership of 150 people, the society’s treasurer Josh Boyle urged more members to sign up: “Whether you’re from Hendon or Hebron, Taunton or Tel Aviv, if you believe in a strong Israeli state, then this is the society for you,” he said.

“It is certainly about time KCL had an Israel Society,” president Sami Steinbock added.

“Together with our partners at StandWithUs, we are planning to put on a lecture series entitled ‘Voices for Israel’, featuring Israel advocates of all backgrounds and political views.

“We are hoping to present the case for Israel on campus – and given the attention we’ve already received, we have high hopes for the future.”