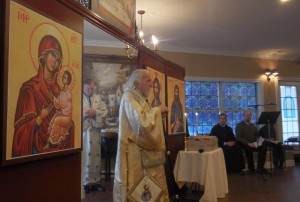 MURRAY — A group labeling itself “progressive” voted Saturday to create an additional parish in the Salt Lake Valley.

A little more than 100 people gathered at Hillcrest Junior High, 156 E. 5600 South, to create the Greek Orthodox Mission Parish Saturday. The majority voted in the affirmative.

“This is your chance to do it right, to do what you’ve learned over the years and to do it with a fresh start,” Father Luke Uhl, chancellor for Metropolitan Isaiah of Denver, told those gathered.

If contentions arise, “Resolve them in love,” he advised, possibly alluding to the strife that has cropped up in the Greek Orthodox Church of Greater Salt Lake in recent years.

The parish will function under the Metropolis of Denver, distinct from the current Salt Lake parish meeting at the Holy Trinity Cathedral, 279 S. 300 West, and Prophet Elias Church, 5335 S. Highland Drive. 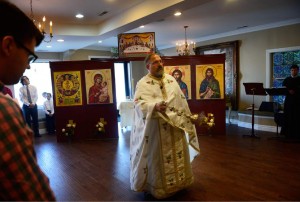 Eleven members of the new parish were called to serve on a parish council, six until December 2015 and five until the end of 2014. An interim priest or priests will fill in until a full-time priest can be appointed by Metropolitan Isaiah.

“We want to focus on the Orthodox faith and growing in our faith together. That’s our sole purpose. We’re not complaining. We’re not griping about anybody or anything. Sometimes you know, you have to be forced out of your comfort zone to go do something that becomes a good thing later,” said Charles Beck, newly elected parish council president.

Parishioner Chuck Karpakis said in a June 8 devotional that the group sought a split because of what it saw as the secular focus of the current parish and of the ousting of priests over the decades.

Parishoner Bill Souvall said the Greek Orthodox Mission Parish has a “different vision of orthodoxy” than the other parish, but declined to explain further. Those interviewed were insistent on wanting to maintain a positive relationship with their sister parish.

More than one year ago, financial struggles in the parish led to a 40 percent pay cut for three priests and a halt to services. In August, the Greek Orthodox Church of Greater Salt Lake voted in a 220-215 split to reinstate the pay and provide back pay to the three priests. They also asked that one priest be reassigned.

A fight broke out at the Prophet Elias Greek Orthodox Church in January after then Father Michael Kouremetis, a former priest at the church, said he would still work at the church even though he was let go in December. Parishioners began pushing and shoving and police were called, according to media reports at the time.

Father Michael Kouremetis was reassigned from the Prophet Elias Church to the St. George Church in Kingston, New York, in June.

The conflict reached Ecumenical Patriarch Bartholomew of Constantinople in February, who reportedly told Archbishop Demetrios, primate of the Greek Orthodox Archdiocese of America, to fix what was going on in the Salt Lake parish.

Shortly afterward, Bishop Andonios of Phasiane, chancellor of the Greek Orthodox Archdiocese of America sent a letter to the parish and council, saying there were no plans for the two churches in the parish to separate. Instead he asked them to resolve their differences and “rebuild the unity which has been shaken, so that you may be perfectly joined together.”

A steering committee of Greek Orthodox members in Salt Lake, led by Souvall, was formed in April to explore the option of creating a new parish. Since then, they established stewardship responsibilities, a budget, funds and received the blessing of Metropolitan.

The first Divine Liturgy for the Greek Orthodox Mission Parish will be held on Aug. 31 at 10 a.m. and Sunday School will be held Sept 14. Services will be held at The Woods on Ninth, 6775 S. 900 East, until the congregation can find a more permanent home.

“We believe that the rapidity of this movement means it’s blessed,” Beck said.

Father Uhl told those present Saturday that they were part of an enduring legacy that will last until the second coming of Jesus.

“It’s a wonderful thing for the community. Church growth is always good. It’s an establishment of a new family of faithful, a new family of believers and it’s always to the glory of God,” he told the Deseret News.

Greek Orthodox churches are part of the Eastern Orthodox churches. This religion was established by early Christians. Although the church puts Christ as its head, many hold a high regard for the Ecumenical Patriarchate of Constantinople, headed by Patriarch Bartholomew. The Archdiocese of America is led by the Holy Eparchial Synod, with Archbishop Demetrios at its head.