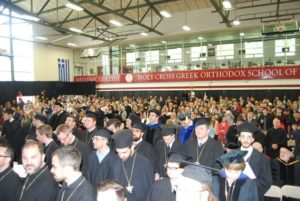 BOSTON, MA – The Hellenic College and Holy Cross School of Theology (HCHC) held its 76th commencement on May 17. Twenty-four students graduated from the College and 35 from the Theological School, of which 19 graduated with a master’s in divinity, the degree for those who wish to become priests. Of the remaining 35 School graduates, seven received a master’s in theology and nine a master’s in theological studies. Also, seven received a certificate in Byzantine music. 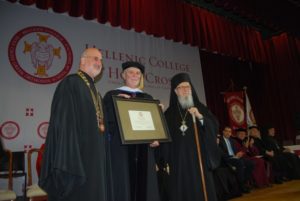 The College’s and School’s valedictorians, respectively, were Theofanis Rauch and Jeremy Troy.

John P. Calamos, Sr., Founder, Chairman, and CIO of Calamos Investments, was awarded the doctor of humanities (DHum), which is an honorary degree.

Also awarded a DHum was Efstathios G. Valiotis, Founder and CEO of Alma Realty and Founder of Alma Bank.

In his address, Calamos congratulated all the graduates and said that graduating college for many is taken for granted. But not for me. I’m from a Greek immigrant family that came to the United States and struggled through the years. Our family values and strong work ethic was very valuable to me. We had a grocery store in Chicago where I grew up. Growing up we went to church and Sunday school. I was the first of any of my family and relatives to go to college.

“I lived the American Dream.

“Looking back, that college experience changed my life along with my family values it gave me the foundation for any success I achieved.

“I worked my way through college. A very confused student, I changed my major several times. When I was a student at Illinois Institute of Technology (IIT), studying architecture and switching to finance, it was all about critical thinking. When I was in college, I gained knowledge about the history of the world through philosophy. Looking back, my education was critical to my success over the years.

“From my experience in Sunday school I became very interested in philosophy and to support that effort I have endowed and donated to IIT a Chair in Philosophy.I have often been asked: ‘why did you endow a Chair in Philosophy?’ My introduction to philosophy inspired me to take many courses in philosophy. It really stimulated critical thinking and how to create new ideas. My introduction to philosophers through my undergraduate coursework taught me how to really think. Philosophy asks what assumptions did you use here and why did you use them?

“I had interest in finance and as a teenager began managing my parents saving by trading stocks. In college I learned that economics is not a math problem. It is economic philosophy: how are we organized as a society? Reading many philosophers from Plato to Socrates and many others, I felt it taught me a great deal about life and gave me a perspective of history going back thousands of years.

In his address, Valiotis called for the Church in America “to become autocephalous or for the Ecumenical Patriarchate to move to the United States. We cannot be governed by a small group of people from Turkey without any flock and purpose, with no mission and with different agenda. Among others present during those remarks were His Eminence Archbishop Demetrios, who is also Exarch of the Ecumenical Patriarchate, and Metropolitans Methodios of Boston, Gerasimos of San Francisco, and Savas of Pittsburgh, and Archdiocesan Chancellor Bishop Andonios of Phasiane.

Valiotis told The National Herald that “the problem of the Church in America is that over the last thirty years it has had two archbishops. One is elected and he is celibate in New York and the other is married and lives somewhere on Long Island”. Valiotis refused to identify the one he labeled the “married archbishop.”

Archbishop Demetrios praised the honorees, stating that “they are extraordinary men. They are successful businessmen, very creative, but they have the characteristic that they are in church on Sundays.”

The archbishop also made reference to the First and Third Chapters of the Book of Revelation and he emphasized the term “be victorious.” He also conveyed the wishes of Ecumenical Patriarch Bartholomew. 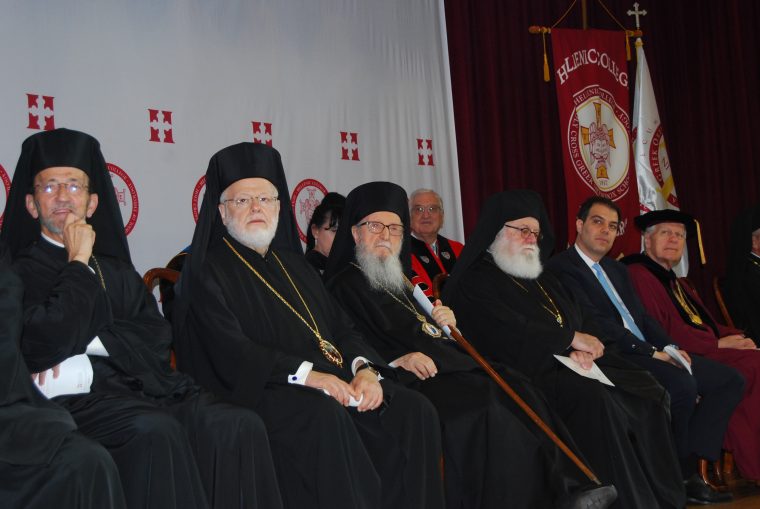 Archbishop Demetrios and Metropolitans Gerasimos of San Francisco, Methodios of Boston, and Savas of Pittsburgh along with Consul general of Greece Stratos Efthymiou, Tomas Lelon, and Bishop Andonios of Phasiane listen to Efstathios Valiotis speaking about the need the Church in America to become Autocephalous.(Photo by TNH/Theodoros Kalmoukos)

After the ceremony, Demetrios told TNH that “the School is trying, it is going ahead and we always look at the future ahead.” Regarding Valiotis’ statements, Demetrios said “Mr. Valiotis is always impressive”. When asked if he agrees with his statements, the archbishop said “that is another issue.”

NEW YORK – The Greek Orthodox Archdiocese of America is addressing concerns regarding comments made and opinions expressed at the 67th commencement of Hellenic College Holy Cross Greek Orthodox School of Theology, May 19, 2018.

Opinions expressed by speakers and honorees during the commencement ceremony are simply their opinions and do not in any way reflect the sentiments of His Eminence Archbishop Demetrios Geron of America, the Holy Eparchial Synod, our School HCHC, or the Archdiocese as a whole.

Statement from Metropolitan Gerasimos on the Mother Church

Beloved in the Lord,

Upon reflection, I have decided to address the unfortunate public statements regarding the relationship between the Ecumenical Patriarchate and the Greek Orthodox Archdiocese of America at the commencement exercises at Hellenic College Holy Cross Greek Orthodox School of Theology on Saturday, May 19, 2018. At the time, the remarks (in Greek) were missed by many in the assembly; I myself was stunned that such sentiments would be expressed so blatantly in the presence of Hierarchs of the Ecumenical Throne, much less in front of the graduates of our School and their families. Although I did subsequently confront the individual in private for his inappropriate comments, I do feel that the faithful of the Metropolis of San Francisco deserve a decisive, deliberate, and dutiful affirmation to serve as a correction to the unfortunate remarks given at our School.

The Greek Orthodox Archdiocese of America is under the spiritual and canonical aegis of our beloved Ecumenical Patriarchate. For anyone to randomly call for the Greek Orthodox Church in America to abandon her duty to the Mother Church is as foolish as it is absurd. Usually, such imprudence would not be worthy of our attention; however, the fact that these remarks were given at our Seminary – the very place where we train the future clergy for our Church in America – demands a complete, resolute and public response. Let there be no mistake. We absolutely reprove and repudiate any call for separating our Holy Archdiocese from the Body of our Ecumenical Patriarchate and assure our faithful that this will not happen.

Let us remember that without its roots, a tree will dry up and wither. We cannot sever our spiritual and ecclesiastical roots without serious consequences. Praying that the Lord will grant His peace and healing upon our Church and all those who labor for His Glory, I remain,