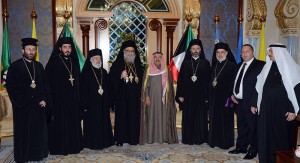 KUWAIT, Jan 14 (KUNA) — Primate of the Greek Orthodox Patriarchate of Antioch Patriarch John X Yazigi congratulated His Highness the Amir Sheikh Sabah Al-Ahmad Al-Jaber Al-Sabah for naming him a “Humanitarian Leader” and Kuwait as a “Humanitarian Center” by the UN.

The visiting Patriarch made this remark to the press, Wednesday, after his meeting with His Highness the Amir.

In the meeting, the Patriarch expressed his appreciation to all the philanthropic work that has been done by His Highness the Amir that helped to alleviate the sufferings of both Muslims and Christians across the globe.

He added that the aim of his visit is to appoint a new bishop at the Greek Orthodox Church in the country.