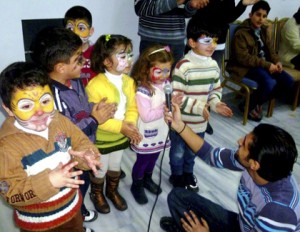 Face painting, singing and performing are all activities used by IOCC/GOPA trauma counselors to help displaced Syrian children express their feelings through art and play. These children are among 2,300 displaced Syrian men, women and children who have benefited from the counseling program since it was first provided in March 2012. Photo: Jennifer Romanos/IOCC

Baltimore, MD (IOCC) — Joumana will never forget the day she, her husband and two children abandoned their home in the war-torn Syrian city of Homs. “The situation was getting worse and worse each day, but we didn’t want to leave our neighborhood,” Joumana recalled. The need to flee came suddenly when they witnessed her mother-in-law killed right before them. After a hasty burial, they left for Damascus with few possessions.

The horrifying memories of war and personal loss continue to haunt Joumana and her family more than a year after they were uprooted from their home and once peaceful life. They, like millions of other Syrians displaced by the conflict, have suffered enormous material and emotional losses that have taken a heavy toll on their mental health. International Orthodox Christian Charities (IOCC) and its church partner, the Greek Orthodox Patriarchate of Antioch and All the East (GOPA), are providing services to help affected families overcome their traumatic experiences and begin rebuilding their lives.

During a four-day retreat in a suburb of Damascus far from the sounds of war, Joumana’s family and other displaced Syrians met with counselors who offered support and a safe environment for participants to discuss their problems and express their grief. The adults participated in group workshops designed to improve their self-esteem and teach them stress management skills needed to become more resilient against the trauma of war. The children’s activities such as puppet-making, drawing, singing and sports were used to help reveal war-induced behaviors. Those requiring a need for specific attention met one-on-one with a counselor who determined if further mental health treatment was needed.

“As heartbreaking as it was to see so much suffering and sadness, it was also so fulfilling to witness the progress each person made and to hear them laugh again,” said IOCC/GOPA counselor Marwan Ariss. “At first, they were self-conscious. It was so hard for them to open up and let go, having been so serious for so long. At the end of the first day, every single participant was putting their heart into each activity. Through this program, participants got to know each other, shared experiences, cried and laughed together. In a nut shell, they let everything out and made new friends.”

Joumana and her family are among 2,300 displaced Syrians who have benefited from the support program since it was first provided in March 2012. With 18 field offices across the country, IOCC/GOPA continues its efforts to support one of the largest established networks of life-saving humanitarian aid inside Syria where more than 7 million people are currently in need of assistance. In addition to its work inside Syria, IOCC staff is on the ground working regionally to address the growing needs of more than two million refugees in Jordan, Lebanon, Iraq and Armenia as well as people in need in those host countries.

Since 2012, IOCC, an ACT Alliance member, has been addressing the well-being of Syria’s most vulnerable people by providing urgently needed humanitarian aid and self-help programs to nearly 890,000 Syrians displaced by the civil war or struggling to survive as refugees.