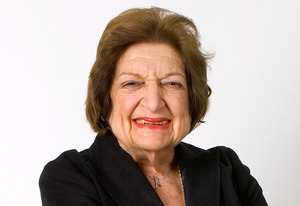 Helen Amelia Thomas (August 4, 1920 – July 20, 2013) was an American author and news service reporter, member of the White House press corps and opinion columnist. She worked for the United Press and post-1958 successor United Press International (UPI) for 57 years, first as a correspondent, and later as White House bureau manager. She was a columnist for Hearst Newspapers from 2000 to 2010, writing on national affairs and the White House. She covered the administrations of eleven U.S. presidents—from the final years of the Eisenhower administration to the second year of the Obama administration.

Thomas was the first female officer of the National Press Club, the first female member and president of the White House Correspondents’ Association, and the first female member of the Gridiron Club. She wrote six books; her last, with co-author Craig Crawford, was Listen Up, Mr. President: Everything You Always Wanted Your President to Know and Do (2009). Thomas retired from Hearst Newspapers on June 7, 2010, following controversial comments she made about Israel, Israeli Jews and the Israeli–Palestinian conflict.[1]

Born in Winchester, Kentucky, Thomas was the seventh of the nine children of George and Mary (Rowady) Thomas, immigrants from Tripoli in what was, at the time, Syria (later, the area became Lebanon).[2][3][4] Thomas has said her father’s surname, “Antonious”, wasanglicized to “Thomas” when he entered the U.S. at Ellis Island,[3] and that her parents could neither read nor write.[2] Thomas was raised mainly in Detroit, Michigan, where her family moved when she was four years old, and where her father ran a grocery store.[3][5]

She was raised as a Christian in the Greek Orthodox Church.[3]  She attended public schools, and decided to become a journalist while in high school.[7] She enrolled at Wayne University in Detroit, receiving a bachelor’s degree in English in 1942,[8] as Wayne University did not offer a degree in journalism.[9]

Surrounded by family and friends, she died peacefully in her Washington, D.C. home Saturday morning, July 20, 2013.

Helen Thomas devoted her nearly 70-year career in journalism to the pursuit of the public’s right to know. She was a champion of the First Amendment, fervently advocating for the freedom of speech and the freedom of the press. For years, she proudly occupied her front row seat in the Press Briefing Room at the White House, considering it the people’s chair in the people’s house. She always acknowledged the privilege of being the eyes and ears of the public, and she boldly and unabashedly asked the hard questions to hold our leaders accountable.

Helen Thomas began her career in the 1940s as a young woman working in a man’s business overcoming many institutional barriers that kept women from equal access. Through her tenacity, integrity, and willingness to follow-up any lead and work any hour of the day or night, she reached the pinnacle of her profession and paved the way for the next generations of women to follow.

Helen Thomas will be brought back home to Detroit, the beloved city of her youth, where she will be buried.