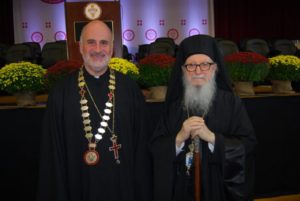 BOSTON – In a confidential letter, dated May 8, 2018, to His Eminence Archbishop Demetrios of America eleven members of the Board of Trustees including members of the Executive Committee as well of Hellenic College and Holy Cross Greek Orthodox School of Theology (HCHC), warned in a most official and final way that Hellenic College is threatened with elimination and the Theological School is in danger of losing its academic accreditation, while its future is doubtful. They have arrived at the point of stating that maybe they will not accept students for this coming September.

The members of the Board of Trustees in their letter-report which was obtained by The National Herald write to the Archbishop as Chairman of the Board “regarding the very serious state of the institution” they stated and they request the immediate removal of the School’s President Rev. Christopher Metropulos. They wrote that “as trustees of HCHC, we have become recipients of a special spiritual and legal duty. How we exercise this duty is not only something for which we must answer to the Commonwealth of Massachusetts but, much more importantly, something for which we must answer to God and to all the faithful members of the Greek Orthodox Archdiocese of America who love and depend on HCHC.

In addition, those of us who are members of the Executive Committee serve as representatives of all of the other trustees; they depend on and expect us to oversee the institution’s well-being, to report to them, and to communicate their insights and concerns to Your Eminence and the other corporate officers.”

The entire letter has as follows:

Christ is risen!  Your blessing!

With respect and love for you, the Greek Orthodox Church in America and Hellenic College / Holy Cross, we offer the following report and proposal regarding the very serious state of the institution.

As you reminded us at the meeting on April 24, 2018, the meaning of the word fiduciary derives from the Latin term, fidere, meaning “to have faith.” As trustees of HCHC, we have become recipients of a special spiritual and legal duty. How we exercise this duty is not only something for which we must answer to the Commonwealth of Massachusetts but, much more importantly, something for which we must answer to God and to all the faithful members of the Greek Orthodox Archdiocese of America who love and depend on HCHC. In addition, those of us who are members of the Executive Committee serve as representatives of all of the other trustees; they depend on and expect us to oversee the institution’s well-being, to report to them, and to communicate their insights and concerns to Your Eminence and the other corporate officers.

For approximately 18 months, we have expressed to you repeatedly our very serious concerns about the direction of HCHC under the leadership of Fr. President Christopher Metropulos. We have communicated details about the institution’s spiritual, academic, financial, administrative, and governance condition. Our intention throughout has been simple: to exercise faithfully our responsibility as fiduciaries in the full sense of the term.

On April 24, 2018, we participated in the special BOT meeting convened to hear and assess Fr. Christopher’s proposed “recovery plan” in light of HCHC’s rapidly declining conditions, a plan the full Board had unanimously tasked him to prepare at its January 19 meeting. Despite the fact that Fr. Christopher did not send his “plan” to the Board in advance of the meeting because he said he did not trust the Board to keep it confidential, we patiently listened to Fr. Christopher’s remarks; we considered his points carefully; we asked respectful questions; and we, along with seemingly all who attended, became convinced that what Fr. Christopher offered us was totally insufficient. It was not a “recovery plan,” it was a set of ideas and suggestions without coherence, without supporting evidence, without contributions from the Deans and faculty, and without a systematic path forward.  In short, at a time of crisis for the institution on a number of fronts, Fr.Christopher took three precious months to develop and present to the Board what he described himself as a set of “talking points,” a far cry from the “robust plan” the Board had asked him to prepare.

We have had serious concerns about Fr. Christopher’s abilities for many months; now, however, we believe beyond doubt that tolerating his continuation as the President of HCHC would be a betrayal of our spiritual and legal responsibilities as trustees. In addition, we cannot, as fiduciaries, accept an incoming class at HCHC without a compelling recovery plan and a President capable of executing it in collaboration with staff, faculty, trustees, and other donors.

Before we delineate an alternative recovery plan, we would like to recap the key developments at HCHC over the past 3 years.

Rather than promptly informing the EC or the Board of these significant developments, Fr. Christopher remained silent, only acknowledging the developments when asked about them in the presence of the full Board. As of June 30, 2018, HCHC will not have a senior management team.

Realistic projections for the next two fiscal years are equally dire.  The table set forth on Attachment II hereto sets forth HCHC’s projected “baseline” financial performance for the fiscal year’s ending June 30, 2019 and 2020.

As is evident from these figures, which project cash deficits over the next two fiscal years ranging from ~$3.7-$3.9 million per year, HCHC’s financial situation has reached crisis levels.  In order to fund operations for the balance of this fiscal year (which will require ~$1,050,000) and achieve a balanced budget for the next two fiscal years, which is essential in order to justify admitting the next incoming class, HCHC will require ~$8.7 million of incremental funds through either additional revenues or reduced costs.

With the departure of Kosta Alexis, who indicated that he left due to a lack of Presidential “leadership and vision,”  the school is left without a professional development officer at a time when the need for such skill set could not be more critical.  Since Mr. Alexis’ departure in 2017, Fr. Christopher has made no effort to search for a replacement.

Given the advanced state of the crisis within which HCHC now finds itself, the uphill demographic changes (“the fundamental problem is too many institutions chasing too few students”1), and the competitive and assessment landscape of higher education today, Hellenic College’s demise is much more probable than its recovery, and Holy Cross is in grave risk of losing accreditation. The examples of small colleges and seminaries that have closed or merged with other institutions are abundant. We do not say this out of a lack of faith or hope; we say it as a reality that must be taken seriously, especially as the Board considers whether or not to accept an incoming class in the Fall of 2018.

Small colleges that defy this trend today are those that “have found a strong niche”2 and that have a President who inspires and collaborates with senior management and with trustees. As a hard-working and faithful priest of the Church, Fr. Christopher has our respect; as our brother in Christ, he and his family have our love and prayers. However, in light of our experience over the past three years, we have withdrawn our confidence in him as HCHC’s President. In our judgment, even if the “recovery plan” he presented on April 24th had been a compelling plan, he is not capable of leading the HCHC community through such a complex and inescapably collaborative endeavor.

We need a leader who will work with us—not ignore us; who will solicit and listen to our expertise—not sideline and patronize us; and who will bring out the best in the students, staff, faculty, trustees, alumni, and benefactors of this sacred school.

The foregoing sets the context for what we believe to be the essential prerequisites to a successful recovery plan for HCHC.  These prerequisites, which are set forth below, constitute the immediate and decisive actions that we believe must be taken in order to set the stage for the recovery of HCHC and enable the Board to justify acceptance of an incoming class for the 2018-2019 school year.

Prerequisite #1 (New Presidential Leadership): HCHC needs a new leader immediately. Fr. Christopher needs to submit his letter of resignation to Your Eminence and the Board or be removed, in either case effective immediately following graduation (May 20, 2018).

Prerequisite  #2 (Near Term Financial Resources): Anchored by (i) a commitment from the Archdiocese to get current on its financial commitment over the next 2 years (1.75M arrears + 1.0M budgeted for current year), (ii) identified cost savings resulting from financial exigency and other cost saving measures, and (iii) financial commitments in support of the HCHC Recovery Plan, HCHC must have a credible and realistic balanced budget that will carry the school through June 30, 2020. The Finance Committee, Interim President and administration should jointly and promptly determine whether such a budget can be developed.

The recovery plan should begin in earnest on May 21, 2018, immediately following graduation weekend. We believe that immediate and decisive action with respect to the Essential Prerequisites outlined above gives HCHC its only viable  chance of overcoming the daunting challenges that it currently faces.  Without the Essential Prerequisites, any recovery plan, including the plan outlined herein, will not be successful. Assuming that the Essential Prerequisites have been acted upon, below is a preliminary summary of the key elements of the Recovery Plan, starting with a tentative financial resource plan.  The exact details of the plan will continue to be developed and refined in conjunction with the Interim President and the administration:

– We believe that the taking of action with respect to the Essential Prerequisites and adoption of a credible Recovery Plan will position HCHC to raise significant levels of incremental funds from donors that do not want to see the school fail.

– On a voluntary basis and without solicitation, trustees with knowledge of HCHC’s current situation have volunteered to contribute a total of $400,000 contingent on adoption of a viable recovery plan that includes the essential prerequisites referenced above.  We believe that decisive action on the Essential Prerequisites and adoption of the proposed recovery plan will draw substantial additional support from donors who are currently not willing to support HCHC under Fr. Christopher’s leadership.

– If a program is eliminated, we are obligated to provide each student who matriculated in that program with either a “teach out plan,” whereby we provide the remaining required courses for completing the degree over the next 1-3 years and/or a transfer plan, whereby we arrange for affected students to complete their degree at another undergraduate institution. If we declare financial exigency, we are only obligated to arrange “transfer plans.”

– Reduce full-time faculty by at least 50%, offering half and part-time positions as needed to cover core requirements. Move from 2 faculties to 1 faculty, with 1 Academic Dean.

– Name a campus Chaplain, ideally from within, and refocus on cultivating a healthy and prayerful Orthodox ethos on campus.

– Offer a menu of global Orthodox immersion experiences ranging from 5 or 6 days to a full semester abroad.

– Further promote Health & Well-being of all students, staff, and faculty

– Increase Summer school offerings with optional on-campus housing and market to Orthodox students enrolled elsewhere. “Spend 3 weeks on campus taking an intensive course, connecting with God and fellow Orthodox from around the country.” This could be like CrossRoad 2.0.

– Property and facilities rental / use