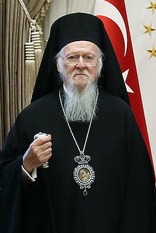 On Monday, September 3, 2018, before the entire Hierarchy of Metropolitans and Bishops of the Church of Constantinople, who were meeting in the Queen of Cities for the Synaxis of the Hierarchs of the Ecumenical Throne on the feast of Indiction, His All-Holiness Ecumenical Patriarch Bartholomew delivered an important address on the status of the Ukrainian Orthodox Church, clarifying and reiterating numerous key points concerning the unity of the Holy Orthodox Church and the role within it of the Ecumenical Patriarchate.

This instructive address followed a two-and-a-half hour private discussion on Friday, August 31, between His Beatitude Patriarch Kirill of Moscow and All Russia and His All-Holiness Ecumenical Patriarch Bartholomew on matters of inter-Orthodox concern.

His All-Holiness gave an address full of theological wisdom and historical insight, speaking “as the guardian of the holy and sacred traditions of Orthodoxy, as well as of the dogmas alike of the Holy Seven Ecumenical Councils and other local councils, but also of the teachings of the Holy Fathers,” noting that “the Ecumenical Patriarchate exists as ‘the small flock’ (Luke 12.32), which seeks neither worldly renown or secular power, passionately loves ‘the word of God and testimony of Jesus Christ’ (Rev. 1.2), enjoys canonical jurisdiction and all apostolic privileges in its responsibility for safeguarding the unity and communion of the local Churches but also for the overall journey of Orthodoxy in the contemporary world and history.”

Turning his attention to the situation of the Ukrainian Church, His All-Holiness pointed out that “no matter how much some wish to embellish the situation in Ukraine, history proves them wrong and presents indisputable arguments demonstrating that the origin of difficulties and reactions in Ukraine are neither a recent phenomenon nor something created by the Ecumenical Patriarchate.” His All-Holiness also reminded the assembled hierarchs of the unfortunate fact that “already from the early 14th century, when the see of the Kievan Metropolis was moved without the canonical permission of the Mother Church to Moscow, there have been tireless efforts on the part of our Kievan brothers for independence from ecclesiastical control by the Moscow center. Indeed, the obstinacy of the Patriarchate of Moscow was instrumental in occasionally creating repeated mergers and restorations of ecclesiastical eparchies, uncanonical elections of Bishops as well as schisms, which still afflict the pious Ukrainian people.”

His All-Holiness also noted that “a study of the matter in the light of the sacred canons does not justify any intervention whatsoever by the Church of Russia.” This is because “the Tome proclaiming Moscow as a Patriarchate does not include the region of today’s Metropolis of Kiev in the jurisdiction of Moscow.” It was only “in the year 1686, our predecessor, the late Patriarch Dionysios IV, following great political pressure from the harrowing circumstances and for peace in the local Church, was obliged to issue a letter granting Moscow the license to ordain the Metropolitan of Kiev on the inviolable condition that every Metropolitan of Kiev would commemorate the name of the Ecumenical Patriarch as his ecclesiastical superior and authority, but also to demonstrate the canonical jurisdiction of Constantinople over this Metropolis.”

That is, said His All-Holiness, how the matter remains to this day: “As far as we know, no other act changing the canonical state of Kiev or revision of the condition to commemorate Constantinople has ever occurred; nor of course has there been any such change on the part of the Mother Church ceding Kiev completely to Russia.” Consequently, “the uncanonical interventions of Moscow from time to time in the affairs of Kiev and the toleration on the part of the Ecumenical Patriarchate in previous years do not validate any ecclesiastical violation.” His All-Holiness stated that the Sixth Canon of First Ecumenical Council of Nicaea was “precisely valid in this case, as the commentator Aristinos observes: ‘Each patriarch should be satisfied with his own privileges and not snatch the privileges of another eparchy, which does not lie within or under the authority of his jurisdiction. For this is the conceit of worldly power.’”

Regarding the present situation, His All-Holiness pointed out that “the occasional deliberate efforts of the Church of Russia to resolve this matter failed. Thus, since Russia, as the one responsible for the current painful situation in Ukraine, is unable to solve the problem, the Ecumenical Patriarchate assumed the initiative of resolving the problem in accordance with the authority afforded to it by the Sacred Canons and the jurisdictional responsibility over the eparchy of Kiev, receiving a request to this end by the honorable Ukrainian Government, as well as recurring requests by ‘Patriarch’ Philaret of Kiev appealing for our adjudication of his case.”

These appeals to the Ecumenical Patriarchate were in accord with those Sacred Canons, as His All-Holiness pointed out that the Fourth Ecumenical Council of Chalcedon “honored the exceptional privilege of ‘the right to appeal’ (ekkliton) of the Throne of Constantinople with the decrees of its 9th and 17th Canons. Numerous instances of the exercise of this right to appeal by Hierarchs and clergy of other jurisdictions have been recorded through the centuries in the historical journey of the Mother Church.”

His All-Holiness observed that “in times of greater or lesser historical challenge, our Patriarchate – faithful to its vocation and ministry – neither says nor does anything unrelated to the incarnate Word. Its mission is not comprised of imposing some new ecclesiological principles but preserving truths of faith, precious traditions and inspired patristic teachings established many centuries ago. The Mother Church does not create or shape its own church management; nor does it complete the Gospel, like the Grand Inquisitor of the renowned Russian author Fyodor Dostoevsky. As the First Throne of Orthodoxy, the Ecumenical Patriarchate exercises a prophetic ministry, extending the mystery of the Catholic Church in Christ Jesus throughout the world in each era.”

In exercising that ministry, the Ecumenical Patriarchate must confront heresies. “The great temptation of the second millennium,” His All-Holiness stated, “which was also bequeathed to the millennium we have now entered, is the status of jurisdictions. The source of this problem is ethnophyletism, the propensity to expansionism and the disregard of the boundaries defined by the Patriarchal and Synodal Tomes. The Ecumenical Patriarchate bears the responsibility of setting matters in ecclesiastical and canonical order because it alone has the canonical privilege as well as the prayer and blessing of the Church and the Ecumenical Councils to carry out this supreme and exceptional duty as a nurturing Mother and birth-giver of Churches. If the Ecumenical Patriarchate denies its responsibility and removes itself from the inter-Orthodox scene, then the local Churches will proceed ‘as sheep without a shepherd’ (Matt. 9.36), expending their energy in ecclesiastical initiatives that conflate the humility of faith and the arrogance of power.”

The Order of Saint Andrew the Apostle, Archons of the Ecumenical Patriarchate, expresses our gratitude to His All-Holiness for the wisdom and piety of this address, and for the clarification it offers on this controversial issue. We pray that all the hierarchs and faithful of the Holy Orthodox Church around the world will consider carefully and heed the words of His All-Holiness, and that Almighty God will bestow upon His Church a renewed unity and peace.

In the Service of the Ecumenical Patriarchate,

Share. Twitter Facebook Pinterest LinkedIn Tumblr Email
Previous ArticleEstablishment of Russian church dioceses in Turkey could become a response to Patriarch Bartholomew
Next Article Why independence for Ukraine’s Orthodox Church is an earthquake for Putin