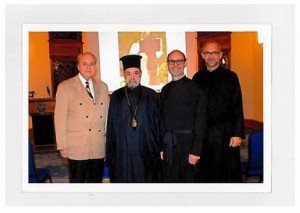 ST. LOUIS – As Christmas approaches, with interfaith family gatherings part of the holiday for many, some well-informed Catholic and Orthodox guests might comment on the steady progress made in the relationship between their churches in recent years.

A two day observance of the 50th Anniversary of the start of the historic consultation that was begun after Rome and Constantinople lifted their mutual 900 year-old anathemas was held at St. Louis University October 9-10 and featured speakers from the Catholic, Protestant and Orthodox Faiths.

The university and the St. Irenaeus Orthodox Theological Institute were sponsors of the auspicious event and among the invited guests were His Eminence Metropolitan Tarasios of Buenos Aries and South America, Fr. Brian Daley, S.J., Professor of Religion at Notre Dame, and several Greek Orthodox students working on their Ph.D. in religion.

In the context of the celebration, the St. Nicholas Family Center hosted a testimonial in honor of His Eminence Tarasios.

He was honored for his work in organizing and directing the reestablishment of Orthodox in the vast continent of South America.  In his presentation he related his experiences in his work in South America, how difficult it is to cover such an area where few Orthodox reside.

Jacob J. Praklow, one of the speakers, said “Christians must adapt to advances in information technology and utilize those advances for the sake of sharing the gospel.”

Orthodox and Catholic Christians were urged must commit themselves emotionally and rhetorically to the process of dialogue , to drive themselves to be the change they wish to see in dialogue.  Seeking greater and substantive understanding of others is the key and Praklow said Orthodox and Catholic Christians ought to intentionally foster “coordination seeking unity” through engagement with communities – online and otherwise – that encourage meaningful Orthodox-Catholic unity. He emphasized that step requires stretching their comfort zones and changing mindsets to prioritize intentional interaction with Christians outside their own parishes and denominations. A forum is need that is dedicated to the kind of charitable Orthodox-Catholic dialogue that Pope Paul VI and Patriarch Athenagoras I called for fifty years ago.

Becky Walker, a religious graduate student at SLU asked “How-much is the present divided state of the church due to questions over doctrine and how much is due to resentment over past wounds?   The words of Optatus admonish us, “without doubt it is evil to do anything against a prohibition, but it is worse not to have unity when you can… for the sake of unity sins should be buried, since the most blessed apostle Paul says that charity can cover a multiple of sins.”

The Reverend Brian E. Daly, S.J. in speaking on the “sole dogmatic grounds for the separation of East and West”  to the Orthodox, to whom the Catholic Church  savors of Western rationalism, Papal authoritarianism and “Christo monism” – the Western Christian tendency to emphasize the centrality of Christ at the expense of the more mysterious, less concretely imaginable role of God’s Holy Spirit, “which blows where it will (john 3.8).

To Catholics, “it embodies the reluctance of Orthodoxy to accept doctrinal development or liturgical adaptation, its fixation on early Greek formulations of doctrine, and its apparent disdain for the alternative traditions of the great theologians of the West.  To both, it has remained a scandal and a continuing justification for continuing to go our separate ways”.

It should be noted that Fr. Daley, a longtime member of the North American Orthodox Catholic Theological Consultation attended this years’ meeting, October 22 – 24, at St. Spyridon Cathedral and Assumption College in Worcester, MA.

The weekend came to a close with a resounding vote of satisfaction with the subject “that there May be one” and prayers that ecumenism thrive to achieve unity of the Orthodox and Catholic faiths.

There follows the December 7, 1965,  preamble prayer to the joint Catholic-Orthodox declaration of Pope Paul VI and Patriarch Athenagoras I of Constantinople lifting the bulls of mutual excommunication in 1054.

“Grateful to God, who mercifully favored them with a fraternal meeting at those holy places where the mystery of salvation was accomplished through the death and resurrection of the Lord Jesus, and where the Church was born through the outpouring of the Holy Spirit, Pope Paul VI and Patriarch Athenagoras I have not lost sight of the determination each then felt to omit nothing thereafter which charity might inspire and which could facilitate the development of the fraternal relations thus taken up between the Roman Catholic Church and the Orthodox Church of Constantinople.  They are persuaded that in acting this way, they are responding to the call of that divine grace which today is leading the Roman Catholic Church and the Orthodox Church, as well as all Christians, to overcome their differences in order to be again “one” as the Lord Jesus asked of His Father for them.”