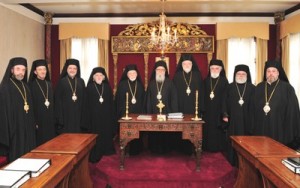 NEW YORK – The Holy Eparchial Synod of the Greek Orthodox Archdiocese of America, that convened for its regularly scheduled Spring meeting, Apr. 20-22, issued the following statement regarding recent tragic events in North Africa and the Middle East.

Every day we learn of people’s suffering throughout the world and it is easy to become desensitized to the pain and affliction caused in various circumstances and in manifold contexts:

Hundreds of migrants have just drowned in the Mediterranean as they innocently sought shelter, even as others exploited their vulnerability.

Thousands have been massacred in Syria, Yemen and throughout many nations of the Middle East as power and greed turn a blind eye to blameless civilians seeking to survive or escape.

Untold numbers are unknown victims of sectarianism, discrimination and exclusion both in their own countries like Nigeria and Zimbabwe or in neighboring regions like Libya and South Africa.  Such conflict and bloodshed is not restricted to the Middle East and Africa but also wreaks havoc in Europe, with hostilities in Ukraine.

Before such ongoing horrific acts of brutality, wrought by brother against brother throughout the world, we will not remain silent, but raise our voices in solidarity and prayer. As Saint Paul reminds us, “If one member suffers, all suffer together; if one member is honored, all rejoice together” (1 Cor. 12.26).

Therefore, we express our concern and compassion for the situation of Christians in Egypt and Northern Africa as well as in Iraq, Syria and the entire Middle East. We express our support for their right to remain and flourish in their homelands. And we condemn every form of oppression and violence against all human beings, irrespective of racial origin, ethnic background or religious conviction.

We are appalled by the discrimination and brutality against people of every religion, but especially against Christians kidnapped and indiscriminately slaughtered. We recall with profound sorrow the disappearance two years ago, during this very period after the celebration of the Lord’s Resurrection, of the Greek Orthodox Metropolitan Boulos Yazigi (brother of His Beatitude Patriarch John X of Antioch) and the Syriac Orthodox Archbishop Yohanna Ibrahim, both of Aleppo, Syria, who were kidnapped by Islamist militants during a joint philanthropic mission in the region.  We continue to pray for their safe return among us.

Moreover, we profoundly grieve over the very recent loss of the Ethiopian and Coptic Christians callously beheaded by Islamic extremists in Libya. The Greek Orthodox Archdiocese of America has always welcomed our Ethiopian and Coptic brethren in our communities throughout this country. We share in their loss and mourning at such unjustifiable events. May God’s mercy serve as balm for their wounds and bring healing to their communities.

We urge the faithful of our Archdiocese and all people of good will to keep our suffering brothers and sisters in their prayer. And “may the Lord of peace give you peace at all times and in every way. The Lord be with all of you” (2 Thess 3.16).