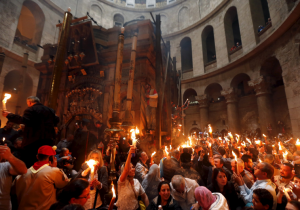 Worshippers hold candles as they take part in the Christian Orthodox Holy Fire ceremony at the Church of the Holy Sepulchre in Jerusalem. (photo credit:REUTERS)

Holy Fire has descended on the Holy Sepulcher in Jerusalem. The miracle repeats yet again.

Descent of the celestial flame is an undeniable sign of veracity of tenets of Orthodox Christian faith and their grace.

The Holy Fire, expected by the parish that gathered around the sepulcher since morning, was brought out by Patriarch Theophilos III of Jerusalem. Thousands of believers have distributed the fire among themselves.

The Orthodox Patriarch entered the Church of the Resurrection at approximately 15:14, Georgian time, and the church was subsequently closed. Before he entered, the Patriarch was searched by clergy of various faiths and officers of the Israeli police. The fire descended on the sepulcher precisely at 15:18.

Prior to that, the Patriarch held a public prayer, which was attended by thousands of people from various countries, including Georgia, who came to witness the miracle.

Descent of the flame was confirmed by messengers and clergy alike. The miracle took place for the first time in II century A.D. According to the legend, when the church wardens were about to fill the lamps to make them ready to celebrate the resurrection of Christ, they noticed that there was no more oil left to fill the lamps with. Upon this, Bishop Narcissus of Jerusalem ordered them to be filled with water. He then told the wardens to ignite them. Suddenly, before the eyes of all present, every single lamp burned as if filled with pure oil and the flames persisted for the entirety of the celebration.