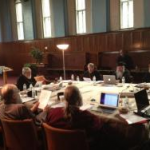 During the meeting, the hierarchs