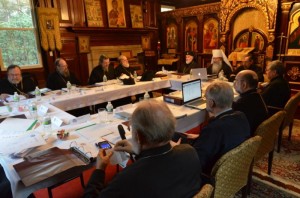 SYOSSET, NY [OCA] – The Holy Synod of Bishops of the Orthodox Church in America held its spring session at the Chancery here Tuesday through Thursday, March 12-14, 2013.

“It has been a little over a month since my enthronement in Washington, DC on January 27, and this report will serve as my monthly review for that time period,” said Metropolitan Tikhon in his opening address. “It is still my hope to provide my brother bishops with regular updates on the most crucial matters affecting the Orthodox Church in America in order to increase our level of communication and reduce the amount of time needed to review matters when we meet. In my first address to the Church, I stated that I had ‘no agenda other than that given to the Holy Apostles, no vision other than that set forth in the Holy Gospels, in the writings of the Fathers and in the decisions of the holy and sacred councils.’ I am nevertheless conscious of the high expectations that are placed on the office of the Primate and that these expectations fall to every one of us on the Holy Synod.”

Highlights of the session, according to Archpriest Eric G. Tosi, OCA Secretary, include the following.

A photo gallery may be accessed on the OCA web site and OCA Facebook page.