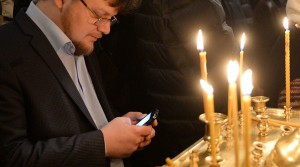 The plans were revealed to Izvestia daily by Roman Bagdasarov, deputy head of the Russian Orthodox Church’s department for relations with the society, who’s also a high-placed member of the Russian Inter-religious Council.Bagdasarov said that the Russian Orthodox Church and other religions wanted to get involved in the information space as a large part of modern life takes place there. However, the clerics were well aware of the chaos and various hazards of it and wanted to offer users some protection.

To that end, certain church structures with support of the state would launch a network of free Wi-Fi spots near churches and in public places, especially those popular with the younger generation. The network will be serviced by a team of specialists who would manually check all data and block potentially-hazardous content.

“We’re not suggesting that the Orthodox internet will only have the Patriarch’s preaches and Christian websites. It will have lots of things, including normal movies, both Russian and foreign, that impart traditional values and traditional morals, patriotism and protection of family and children,” Bagdasarov told reporters. “And I would like to add that we are not restricting anyone’s freedoms, those who don’t want to use the Orthodox Christian internet may simply not use it.”

The head of the Ethnic Policy Department of the Moscow City Hall, Vladimir Chernikov, said that the authorities could throw some support behind the project, but he doubted that any money would be allocated for it from the city budget.

Official representatives of other major religions also welcomed the idea. The deputy head of the Council of Russia’s Muftis added that special content-filtering projects were being developed for a Muslim audience as well.

In 2014, the central Russian region of Kostroma, together with the non-profit group League of Safe Internet, launched a project in which all 29 regional internet services’ providers changed their user agreements so that subscribers will only have access to a so-called ‘white list’ of about 500,000 websites approved by the league’s experts. Those who wanted to expand their digital adventures beyond the safe area had to sign an additional agreement stating that they are doing so at their own risk.

The authors of the project said that in case of success it could be expanded to other Russian regions. So far, that has not happened.